The Fourth Round Rumble
くさのフィールド！いがいなきょうてき！

Ash's Muk knows Body Slam. Ash advances to next round. 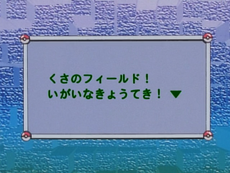 The Fourth Round Rumble (くさのフィールド！いがいなきょうてき！ The Grass Field! An Unexpected Powerful Enemy!) is the 79th episode of Pokémon: Indigo League.

As Gary lost his recent match, Ash battles an opponent named Jeanette. While Bulbasaur managed to defeat her Beedrill and Scyther, Ash's luck goes down as Jeanette sends Bellsprout, who evades attacks and can repel Pokémon's moves. However, Ash has a secret ace he has not used in quite some time, which turns the side of the battle back to him.

The episode begins with Gary facing off against Melissa, using Nidoking against her Golem, while Ash, Misty and Brock are in the stands as spectators. Nidoking uses Horn Attack, but Golem stops him and uses Seismic Toss. Nidoking is defeated and Melissa wins, striking Gary hard for this defeat. As Gary is going to his car to leave, Ash comes up to him — Gary claims that the only reason he lost to Melissa was because he got distracted by his cheerleaders. He tells the girls they will get over it, which they disagree with him about. After Gary leaves, Ash talks to Pikachu and expresses surprise that Gary lost, figuring that he'd probably make it past the preliminary rounds of the Indigo League. Ash wonders if maybe he should just drop out of the competition. However, Brock comes up to him and tells him not to drop out, as he, Pikachu and Misty all believe in him. Misty soon comes up to the boys and informs Ash that his battle on the grass field will be starting soon.

Jessie and James sell the souvenir, while Meowth reminds them they are here to steal some Pokémon. James is happy for this normal job and waters his Victreebel and gets latched by it. A customer appears, wanting to buy some badges, but Jessie and James reply they have none left. Meowth tells they have and going in the back, Jessie and James see that he is making the badges out of bottle caps. Ash goes to the stadium, while Misty and Brock watch him battle. Misty hoped they would have given him advice, but Brock tells Ash wanted to win by himself. Misty thinks a Bulbasaur would be a good Pokémon to battle and asks Brock who is Ash's opponent. Brock looks through the program and explains that all it says is that Ash's next opponent is a female trainer named Jeanette Fisher.

A red carpet emerges from the hall and Jeanette appears, with a lot of cheerleaders. Misty sees she has a lot of cheerleaders while she and Brock cheer for Ash. Brock seems dazed by Jeanette, so Misty yells to have him remember they are on Ash's side. Ash sends the Pokémon Misty mentioned, Bulbasaur, while Jeanette her Beedrill. Beedrill goes to tackle, but Bulbasaur dodges. Bulbasaur uses Razor Leaf, but Beedrill dodges and retaliates using Twineedle. Bulbasaur dodges, including the Poison Sting. Misty hopes Jeanette does not have Pokémon like Beedrill and Brock hopes she does not have a boyfriend, making Misty yell at him once more. Beedrill gets entangled by Leech Seed, making Brock think Jeanette is losing. Bulbasaur tackles Beedrill and wins.

Jeanette calls Beedrill back and sends Scyther. Scyther goes to slash, but misses, so uses Quick Attack, hitting Bulbasaur. Bulbasaur uses Vine Whip, but Scyther's attacks repel the move. Scyther uses Double Team, making Bulbasaur to be in a difficult position. Bulbasaur uses Vine Whip and banishes the illusions, though the real Scyther charges and attacks Bulbasaur. Bulbasaur uses Razor Leaf, but misses. Scyther uses Double Team and attacks Bulbasaur, as it misses with Vine Whip and gets hurt. Bulbasaur uses Vine Whip to banish the illusions and attack the real Scyther, defeating it. Misty and Brock are impressed, as Ash won two battles without their help. Team Rocket are having the balloon as a decoy while they go to get the people's Pokémon. Two Officer Jennys see this and Growlithe uses Flamethrower to burn the balloon down. James goes to start the hose, but the Officer Jennys made the machine turn off and chase them. While escaping from the police, Team Rocket trip over and bump into a stand, but quickly stand up as salesmen selling hot dogs and ice cream.

Jeanette sends her last Pokémon, a Bellsprout, making Ash, Pikachu, Misty and Brock surprised. Ash believes Jeanette does not have any strong Pokémon and sent Bellsprout out as a last resort. Ash believes this battle is going to be the shortest one in the Pokémon League history, as Bulbasaur goes to tackle. Surprisingly, Bellsprout lifts Bulbasaur and sends it behind. Bulbasaur attempts to attack once more, but gets thrown away. Bellsprout comes to Bulbasaur and trashes it, then bangs it to a wall and wins. Ash calls Bulbasaur back (quite shocked at how Bellsprout won) and sends Pikachu. Pikachu uses Thundershock and misses. Bellsprout uses Razor Leaf and, though Pikachu dodges, the leaves cut some nearby rocks in half. Pikachu uses Thunderbolt and hits Bellsprout, but it does not seem hurt, as Jeanette says that the legs were binded to the ground and did not conduct electricity — hence no damage. Pikachu goes to punch and kick Bellsprout, but misses and gets hit when Bellsprout kicks it with its roots.

Misty and Brock are baffled, and wonder how can Ash win this, as Bellsprout is Jeanette's strongest Pokémon. Suddenly, Oak and Delia appear to watch the match, sitting next to Misty and Brock. Oak knows his grandson lost, but looks on the bright side, saying that “it’ll do Gary good to see every road has a few bumps along the way.” Ash's mom and the professor yell that since Gary lost, everyone in Pallet Town cheers for him.

Ash sends a Pokémon he hadn't seen in a lot of time — his Muk. Jeanette is disgusted, while Oak says that Ash wanted Muk and asked to get it yesterday. Oak admits he underestimated this choice. Bellsprout uses Jump Kick, but lands inside Muk. Bellsprout kicks, punches and throws Muk away, but Muk does not take any damage. Bellsprout uses Razor Leaf, but that doesn’t deal damage to Muk, either. Muk retaliates with Body Slam, engulfing Bellsprout. Bellsprout attempts to free itself, but gets defeated. Ash runs to Muk, who hugs him, making Ash say that he now knows how Bellsprout felt. Jeanette lifts Bellsprout into her arms and tells it she is very proud of the way it battled; finally, Jeanette turns and heads out.

"Uh, did you know that your grandson lost?" - Brock to Professor Oak
"Yes, I know. It’ll do Gary good to see every road has a few bumps along the way." - Professor Oak
"Win this one for your mother, honey!" - Delia Ketchum to Ash
"Now that Gary’s out of the competition, all the folks in Pallet Town are counting on you!" - Professor Oak
"They’re supposed to be cheering Ash on. But all they’re doing is putting more pressure on him." - Misty

"Well, we sold out everything." - Jessie
"Let’s face it — we’re much more successful at selling stuff than we are at stealing stuff." - James
"You’re right. It’s fun, and profitable, too!" - Jessie
"Ha! The next thing you know, you two will want to open a fast food joint." - Meowth
"(gasps) Hey, that’s not a bad idea. We could call it 'Jessie’s." - Jessie
"James’." - James
"Want a burger and fries without trouble?" - Jessie
"If you’re really hungry, make it double." - James
"To protect the world from hunger and thirst." - Jessie
"Our food isn’t bad — at least, not the worst." - James
"The Team Rocket Restaurant, blasting for a bite." - Jessie
"We stay open all day, we stay open all night." - Jessie and James

Gary's cheerleaders are disappointed and sad

Bellsprout and Bulbasaur "dance in the wave of music"

Bellsprout does not take damage

Muk is not hurt by Bellsprout's attacks

then Misty
Add a photo to this gallery
Retrieved from "https://pokemon.fandom.com/wiki/TB079:_The_Fourth_Round_Rumble?oldid=1336525"
Community content is available under CC-BY-SA unless otherwise noted.