Ash and co. meet Bruno, a member of the Elite Four. 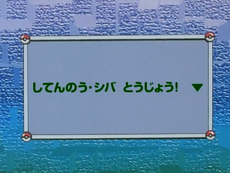 To Master the Onixpected! (してんのうシバとうじょう！ Bruno of the Elite Four Enters) is the 73rd episode of Pokémon: Indigo League.

Seeing a video, Ash and Brock want to learn from Bruno, a member of the Elite Four. They, along with Misty, go to the mountains, but get chased by a gigantic Onix. Luckily, Bruno saves them, but after being told about their quest, Bruno does not have much secrets to share, but to capture the strongest Pokémon. Ash and Brock, along with Team Rocket, decide to capture the gigantic Onix, but they see it is much more to handle than it looks.

Ash and Brock watch a video of Bruno, a member of the Elite Four. Misty interrupts them by shutting the TV down, so Ash and Brock respond they want to learn from the video. Brock tells her he can teach them secrets, though Ash wonders which ones. Ash knows they can learn from him, but Brock does not believe they will have a chance meeting him, as he is busy. Ash's mom tells them Bruno is secretly going to Mount Hideaway to train. Ash is happy to hear that and lets her know that they will go seek Bruno.

Misty sees they are several miles to the mountain, but Ash and Brock want to rest, so they sit down at a bench outside a shop. A lady comes out and is asked if she saw Bruno. The lady confirms that she saw Bruno among the mountains, though she knows that there are some thieves around the area. Looking at her empty plate, she sees she has been robbed - again. They all hear an alarm and see three men. They turn around and are revealed to be Team Rocket. They claim they don't want to deal with money, so they steal. The lady gets angry and pounds them, so Team Rocket runs away. The lady turns to the heroes and tells that Bruno is around, but so are gigantic Onix. Brock suspects that the soil causes the Onix to grow larger.

The heroes continue their quest and soon see a road, but going on it they see it is no road, as something passed through. The ground shakes, as the heroes soon see a giant Onix. The heroes run away, but a man tells them to come behind the rock. Onix passes away, so the heroes are grateful for the rescue and soon see that man is Bruno. The heroes thank them and follow him. Bruno wonders why are they following them. Ash and Brock bow down and the latte explains that his friend wants to learn from him, so they promise to learn from Bruno if they do anything he wants.

Ash and Brock carry buckets of water. Misty wonders why they need to carry water and is told this exercise build strength and balance, though Ash trips over and splashes Misty with water. The next exercise is to chop wood. Ash swings the axe and separates a log of wood in two, but a piece flies on Misty's head, knocking her out. The next lesson is to carry rocks, which Bruno believes it shapes inner and outer strength. Ash lifts a rock, but loses balance and goes to Misty, who runs away from him. The last lesson is to peel the bark off a twig. Ash and Brock are confused as what that lesson teaches, but Ash proceeds and cuts the twig. He gives it to Bruno, who responds that one needs to bring a fork while camping and thanks them for the work. The gang is very confused, except Brock, who raises a branch and believes Bruno will stop him from the attack he is going to make. Brock runs and attacks, though Bruno did nothing and got hurt. Brock and Ash want to learn the secret behind the Pokémon training, but Bruno simply tells them one needs to catch strong and powerful Pokémon to win, causing Brock to be in a major disappointment.

Team Rocket overheard that and promise to get the giant Onix. They wander and Meowth does not know how to capture it, so Jessie and James tell him they know some tricks. They come to a valley and wait. Soon, the gigantic Onix emerges, frightening Team Rocket. Ash and Brock comment how Bruno was not as helpful as he should have been. Soon, they hear a sound, as Team Rocket use missiles to attack Onix. The Onix chases Team Rocket in a cave and attacks them. To help them out, Brock sends Onix, Misty sends Staryu, and Ash sends Squirtle. Brock's Onix tackles the giant one, but fails. Staryu uses Water Gun, but Onix shakes it off. Squirtle uses Water Gun as well and distracts the Onix, as Team Rocket runs away. The giant Onix uses tail and defeats Staryu, Onix and Squirtle, while also making Team Rocket blast off.

The Onix tackles the cliff where Ash, Brock and Misty are. Ash and Pikachu fall down. Pikachu uses ThunderShock, but since Onix is a Ground-type Pokémon, it does not work. The Onix strikes, but Ash and Pikachu are saved by Bruno. Bruno carries them to the cliff and orders them to call their Pokémon back, while he goes to fight Onix by himself. Bruno attempts to reason with Onix, but Onix keeps fighting. Bruno goes on its head, causing Onix to strike itself. Bruno does not understand, but calms Onix down. He goes to check in the middle and gets a Sandslash out. Onix is grateful and wants to go with Bruno, so Bruno captures it. Ash, Misty and Brock are impressed and want to know the secret. Bruno admits there is no secret: the idea is to take care of Pokémon and work on that bond, comparing Ash and Pikachu as a great model. Bruno goes away, leaving the heroes with a new experience. Meanwhile, Team Rocket is surrounded by several angry giant Onix, who stare at them.

Ash and Brock watch a video of Bruno

Delia advises Ash to go to the mountains

Onix gets hit by missiles

Bruno attempts to reason with Onix

Onix moving on the ground

Bruno got a Sandslash out

Giant Onix surround Team Rocket
Add a photo to this gallery
Retrieved from "https://pokemon.fandom.com/wiki/TB073:_To_Master_the_Onixpected!?oldid=1330302"
Community content is available under CC-BY-SA unless otherwise noted.