The Evolution Solution (ヤドンがヤドランになるとき When Slowpoke Becomes Slowbro) is the 68th episode of Pokémon: Indigo League.

To uncover one of the greatest secrets of evolution, Ash goes to the Seafoam Islands where he meets up with Misty and Brock (who left him in training for the League). They meet up with Professor Westwood V, who is on the brink of discovering why Shellder goes to bite Slowpoke's tail to evolve. On the other hand, Team Rocket are assigned to capture a Slowpoke and evolve it for the boss. Will their plans work this time?

Ash approaches a long line of people waiting patiently, to which his mother reveals that she arranged a trip to Seafoam Island and Misty and Brock are going with her. Ash wants to go with them, but his mother tells him that he needs to train for the Pokémon League championship and he has to do it at home. After the group says farewell to Ash, Mimey begins to sweep up on the street, sending a column of dust into the air. Ash heads to Professor Oak's laboratory, where he is struggling to find a solution to a pressing evolutionary problem. He shows Ash a picture of a Slowpoke and a Shellder, and explains that a Slowpoke evolves into a Slowbro when a Shellder clamps onto its tail, but that he cannot figure out how they undergo this process.

Professor Oak decides to call upon his colleague Professor Westwood V, who was one of the foremost Professors who wrote the Pokédex. Coincidentally, Westwood lives on Seafoam Island, and Ash uses this research task as an excuse to travel there. After informing Brock and Misty as to the reason for his visit to Seafoam Island, Ash eagerly knocks upon Westwood's door. He warmly invites them in, and reveals the secret behind his title of V. Westwood is surprised at Misty's Togepi, and makes notes on it as he is fascinated by unique Pokémon. He explains that his purpose for relocating to the Seafoam Islands was to discover why Slowpoke evolves into Slowbro by attaching to a Shellder.

Westwood plans to present his findings to the Pokémon Symposium, the forefront scientific community in Pokémon-related research. As they head outside, Westwood V begins to fish in the nearby rockpool, as he relays the information that Slowpokes are one of the few Pokémon that can actually fish. Misty relates the expressionless face of a Slowpoke to that of her Psyduck. Slowpoke manages to capture a Magikarp with its tail whilst Psyduck gets pinched by a Krabby. Meanwhile, Giovanni is relaxing with his Persian after the destruction of his base. Jessie and James are digging for clams, looking enviously on at the people enjoying themselves.

In a fit of frustration, James paws desperately at the ground, pulling out a Shellder. James uses his Weezing to cause the Shellder to faint, but Jessie manages to capture it. Giovanni calls for Team Rocket to break into Professor Westwood V's laboratory, warning them not to mess things up. At Westwood's lab, he reveals that the main mystery involving the Slowpoke's evolution is that the Shellder has a clamped shell before, but a spiral shell after the process. they are interrupted by the likes of Team Rocket, who crash land in a parasail. After reciting their motto, Team Rocket demand that Westwood program the Team RockeDex, a Team Rocket variant of the Pokédex.

Jessie attempts to use her Shellder to force Slowpoke to evolve, but Professor Westwood flees with it outside of his laboratory. When Shellder lunges to attach itself onto Slowpoke's tail, Misty's Psyduck protects it and knocks it away. When Jessie attempts to evolve Slowpoke once more, Shellder clamps down onto Psyduck's head by mistake. Psyduck gets a terrible headache, and uses Disable to freeze Team Rocket in their tracks. Whilst it uses Confusion to levitate Team Rocket into the air, it snaps out of its headache, sending Team Rocket hurtling to the ground. As Slowpoke moves to thank Psyduck, it trips over Shellder, who clamps down on its tail. Team Rocket are ecstatic that they can present a rare Pokémon to Giovanni.

Team Rocket attempt to capture the recently evolved Slowbro, but they are blasted away by its Mega Punch. Professor Westwood surmises that the evolution of Slowpoke is this way because it is mutually beneficial for both Pokémon; in which Shellder helps Slowbro balance on two feet to use attacks with its fists, and it enables Shellder to travel on land. Psyduck and Slowbro then part ways, as Ash does not regret missing out on a day of training, as he has learned an invaluable lesson from Professor Westwood V on the evolutionary traits of Pokémon. 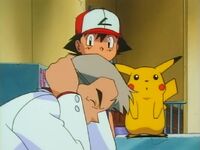 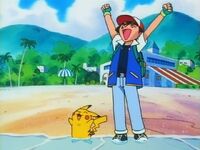 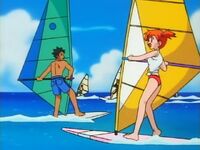 Misty and Brock are having fun 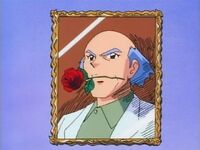 The portrait of Prof. Westwood V 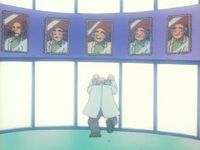 Westwood apologizes to his predecessors 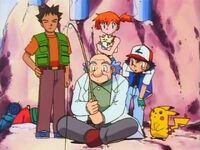 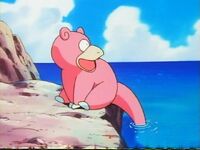 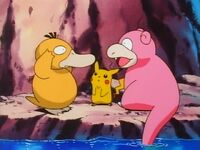 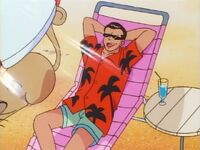 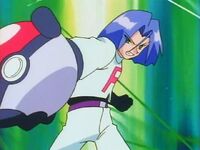 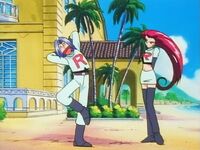 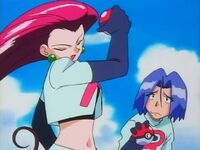 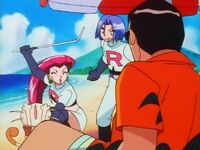 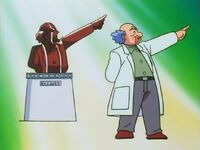 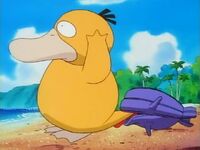 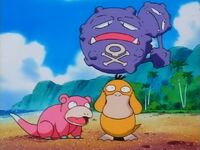 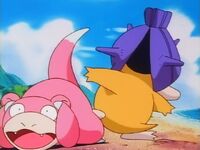 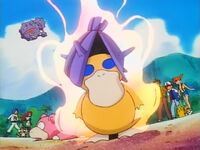 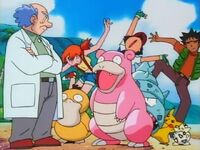 The heroes are told Slowbro is suffering from "Amnesia attack"
Add a photo to this gallery
Retrieved from "https://pokemon.fandom.com/wiki/TB068:_The_Evolution_Solution?oldid=1290451"
Community content is available under CC-BY-SA unless otherwise noted.