Seeing Horsea weaker than usual, Misty decides to go to Cerulean City. When she leaves the Horsea, her sisters persuade her to act in their show, a ballet underwater. During the show, Team Rocket appear, for their attempt to take all the Water Pokémon in the aquarium. Ash and Brock intervene, though Jessie's Arbok puts the Water Pokémon in danger. The Seel appears and attempts to fight back Arbok and results in an unexpected evolution.

Whilst on their way back to Viridian City for Ash's 8th Gym Badge at the gym there, Misty realizes that her Horsea is feeling unwell. Brock presumes that Horsea is dejected because it doesn't get to swim around as much as it would like to. Misty brightens up when she remembers that the Cerulean Gym has a swimming pool, and the gang decides to take a brief detour. As they arrive at the entrance to the Gym, Pikachu points out a poster advertising an "Underwater Ballet". Misty reconciles with her sisters, and proceeds to take Horsea to the swimming pool. Horsea is ecstatic that it can swim around freely, as Misty's sisters inform her that they are participating in the Underwater Ballet.

Brock and Ash ask who the famous ballerina is, to which they point at Misty. Misty herself is shocked at this revelation, to which her sisters reveal that their show became unpopular over time. They explain that they completely remodelled their ballerina act to be underwater, and that Misty's call coincided with their completion of the show. Her sisters believe it to be fate that Misty arrived here on the day before the performance. Although she initially refuses, Misty is coaxed into agreeing by her pleading sisters once they reveal that they open with the first performance tomorrow. They re-enact one of the scenes from the performance, as Team Rocket arrives at the Cerulean Gym, eagerly awaiting the play. As the audience members flock into their seats, Daisy is glad they tricked Misty into becoming the lead character.

Misty is daunted by the sheer number of people in the audience, but remains confident that she can perform her role. Her sisters commence the performance, unveiling a huge glass aquarium in the center of the stadium. Misty dives off into the pool, and begins swimming gracefully alongside the Water Pokémon. Misty's sisters, Lily and Violet, complain that Misty has gotten a better role than them as the mermaid, as Team Rocket assumes their roles as the villains. When Team Rocket reveals themselves to the audience, Brock and Ash instantly recognize them. Jessie and James approach Misty, reciting their motto. To their surprise, the audience applauds Team Rocket, as they attempt to make off with the Water Pokémon. Meowth detonates the roof, as their signature balloon floats into the stadium.

Jessie and James capture the Water Pokémon in nets, as Misty attempts to stop them. Brock, Ash, and Pikachu jump into the pool, as Daisy finds Lily and Violet, who were trapped by Team Rocket in a locker, bound and gagged. Jessie's Arbok fights against Misty's Horsea and Seaking, as James' Weezing is released, but floats to the surface as it cannot swim. Misty's sisters release their Psyduck, which also cannot swim, much to the crowd's amusement. Ash uses his Squirtle to attack Arbok, followed by attacks from Misty's Starmie and Seaking. However, Arbok recovers and chases them around the pool. Before it can finish them off, Seel appears to protect them and begins circling around Arbok. Seel uses Headbutt several times on Arbok, the finishing off with Aurora Beam.

Misty's sisters' Seel then evolves into a Dewgong, which proceeds to easily defeat Arbok with a swish of its tail. Arbok crashes into Jessie and James, and is subsequently frozen by Dewgong's Ice Beam attack. After Pikachu electrifies the pool, Team Rocket are sent blasting off again while at the same time, being sent flying by Dewgong's tail. The audience applauds the finale of the performance, as Misty's sisters exclaim that their performances have been booked out for the next 6 months. Misty leaves her Horsea and Starmie at the Cerulean Gym, in order to perform in the act. As Ash and his friends leave Cerulean City, he commends Misty upon her great performance, to which she tells him to stop flattering her and that he still owes her a bike. 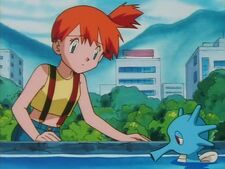 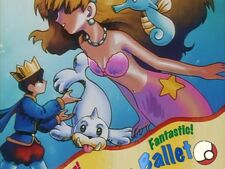 The advertisement of the show 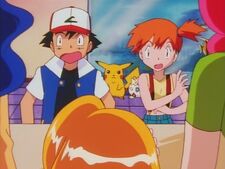 Misty and Ash get surprised 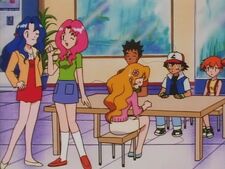 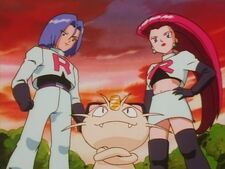 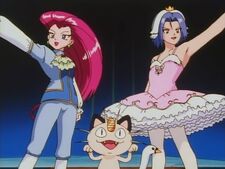 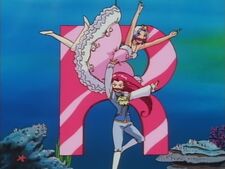 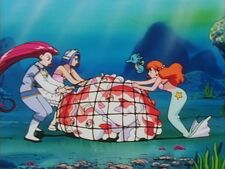 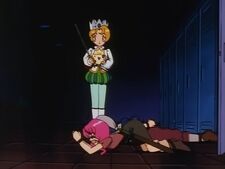 The sisters got captured 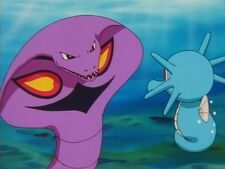 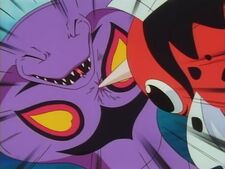 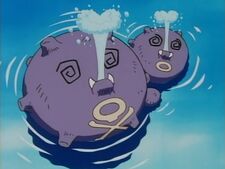 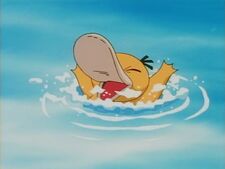 Psyduck does not know how to dive 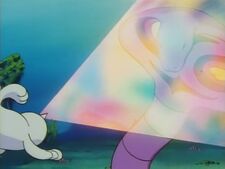 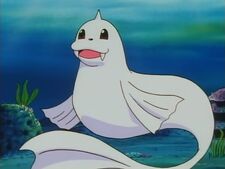 Seel evolved into a Dewgong 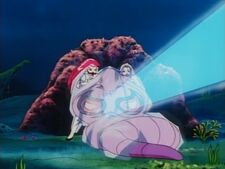 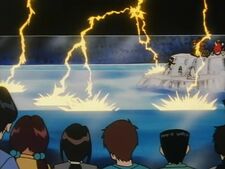 Pikachu uses Thunder on the water 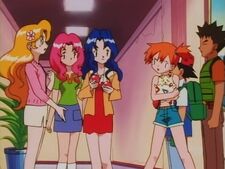 Misty does not want to part Togepi
Add a photo to this gallery
Retrieved from "https://pokemon.fandom.com/wiki/TB061:_The_Misty_Mermaid?oldid=1290444"
Community content is available under CC-BY-SA unless otherwise noted.