On the way to Cinnabar Island

Ash, Misty and Brock have a lunch when Ash spots something in the grass. The spy uncovers himself to be Todd Snap, the Pokémon photographer. He wants to take a picture of Ash's Pikachu by a request of some "old people". However, these "old people" want Pikachu, which makes it certain that they are Team Rocket, who have another plan to capture Pikachu. Will Todd be able to take a good picture of Pikachu, and, more importantly, save Ash?

Misty feeds her Togepi some rice balls, as Ash commends Brock’s skills in cooking. In mid air, Brock forms it into a perfectly shaped rice ball, telling Ash and Misty to eat as many as they want to. Unbeknownst to them, a mysterious stranger eyes Ash through means of a camera. He comments that he has Pikachu in his sights, preparing to capture it. However, Ash becomes wary of the stranger’s presence, knocking the others out of the way.

After recovering, Brock demands to know what took Ash by surprise. Misty consoles her Togepi, blaming Ash for making it cry. Ash states that he thought someone was preparing to shoot them, pointing to the nearest underbrush. Misty refuses his claim, going back to nursing her Pokémon. Ash tells Brock that there was someone distinctly there, but he shrugs it off as Ash’s imagination going wild. Determined to prove his point, Ash uses his Squirtle, which he uses to fire Water Gun at the shrubs. The stranger emerges from hiding, telling Squirtle to stop spraying him with water.

Ash complies, returning Squirtle back into its Poké Ball. Misty asks whether the stranger is all right, to which he confirms that his camera is still functioning. The individual reveals himself to be a professional Pokémon photographer by the name of Snap, and that Ash should consider it an honour that he wanted to take pictures of his Pikachu. Brock wonders why Snap didn’t ask for Ash’s permission to take photographs of Pikachu, to which Snap reveals that he doesn’t want the Pokémon to look staged in any way.

Meanwhile, back at Snap’s house, he proclaims himself to be the individual who took the only known photograph of a living Aerodactyl specimen. None of them corroborate his claim, prompting Snap to fall to the ground. Snap rushes out of the room, handing Ash and the others a copy of Pokémon Times, proving his story. Ash also notices that Snap took a picture of the Aerodactyl whilst it was carrying him, much to the photographer’s surprise. Snap comments that fate has a funny way of connecting people, commenting that he was well known due to that picture, yet Ash did not even get a mention.

Snap apologizes to Ash for his earlier behavior, promising to make him breakfast as consolation. He offers to make the three of them pancakes, which they take up. While Ash and the others eat Snap’s pancakes, Snap prepares to take a photo of the dining Pikachu. Snap tells Pikachu not to stare directly at the camera, but as Snap presses the flash, Pikachu inadvertently electrocutes him. Misty asks him why it is so important to capture Pokémon naturally, to which Snap displays his wall filled with Pokémon pictures.

Brock, Misty and Ash all notice the difference in Snap’s photographs, to which Snap reveals his intention for taking pictures. Brock commends Snap’s insight, as Ash offers to let his other Pokémon get their pictures taken. However, Snap respectfully declines, stating that the only Pokémon he wants to take a picture of is a Pikachu. Snap refuses to divulge why Pikachu is the only Pokémon he wishes to take pictures of, much to Ash’s disappointment. When Snap follows Ash’s movements outside, he recalls an old couple who asked Snap to retrieve Pikachu for them.

Whilst they dine at a restaurant, Team Rocket removes their disguises. Back at the park, Ash and Pikachu clean themselves off at a riverbank. When Snap makes a surprise appearance to take a picture of Pikachu, Ash intervenes, informing Snap that he needs to be much quicker. Snap proclaims to do whatever it takes to get a picture of Pikachu. Meanwhile, Team Rocket begins constructing a trap hole as Snap walks along the pathway.

As they put their disguises on, Snap apologizes for not having taken Pikachu yet. Before James can divulge their true motives, Jessie pulls him away. As Ash and the others walk across the pathway, Snap sets up his camera equipment. Ash states that Snap doesn’t understand the emotions of Pokémon, taking Snap off guard. Ash then falls into Team Rocket’s trap, alongside Misty and Brock. Team Rocket watches anxiously by the road, as Snap peers into the gaping hole. After Snap attempts to rescue them, Pikachu emerges in Snap’s perfect position as he prepares to take a picture.

Meowth reveals that Snap is good at capturing Pokémon on film, much to Jessie and James’ chagrin. When Snap finally manages to capture his perfect shot, the ground beneath Ash’s feet begins to cave in. Snap throws a rope towards the stranded trio, but not before Ash and Pikachu fall into the piping system below. As Ash and Pikachu hold on for dear life, Snap warns them that they are heading for a waterfall and begin to swim in the opposite direction. However, it is no use, as Ash and Pikachu begin to get pulled in.

Due to quick thinking from Snap, Ash and Pikachu grab hold onto Snap’s camera strap, pulling them to safety. However, Team Rocket appears before Snap, revealing their true intentions. As Meowth captures Pikachu, James throws several bombs at the waterfall to make it more difficult for Snap to pull Ash up. However, Ash manages to stall for time, allowing for the bomb in James’ hand to detonate. Ash then uses his Bulbasaur to cut the net concealing Pikachu.

As Bulbasaur continuously whips the trio, they seek refuge in the river system. This then leads Team Rocket back to the waterfall, resulting in them falling into the water below. Ash and Snap share a brief laugh when Pikachu reunites, revealing that the two of them are friends. Later, when Snap attempts to take a group picture of the four of them, it ends in Snap tripping over a rock and falling onto the ground.

"I just want to take pictures of Pokémon in their natural habitats." - Todd

"What is that boy doing?" - Jessie
"He’s taking a picture of Pikachu." (along with Jessie) "Huh?" (turns to Meowth) "Meowth!" - James
"Huh?" (looks at the magazine article on Todd) "The magazine says he’s a — ohh... ‘the best at capturing Pokémon... on film’! Oh, I get it — the article says that he captures them on film. I thought he actually captures them — an amusing mistake." - Meowth
"You’re the mistake!" - Jessie and James, while tossing Meowth up into the air
"Aaaah! Meowth!" - Meowth

"Why did you trick me?" - Todd to Team Rocket
"You tricked us first, little shutter-bug! We wanted you to take Pikachu, not take its picture." - Jessie

"But first, a poem. Team Rocket drifted down the stream. And now we scream!" - Jessie 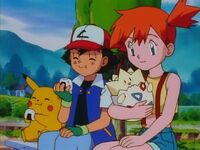 Ash and Pikachu have riceballs 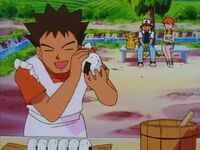 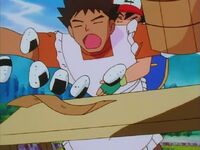 Ash goes to prevent the accident 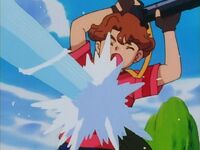 The spy is uncovered 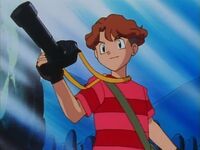 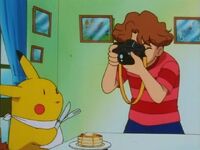 Todd goes to take a photo of Pikachu 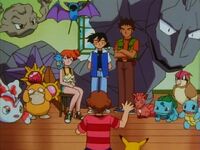 Ash, Brock and Misty go to get a picture 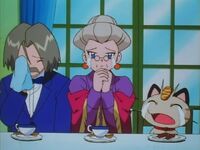 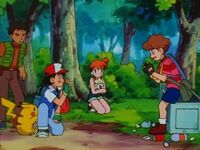 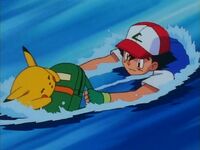 Ash and Pikachu go down the river 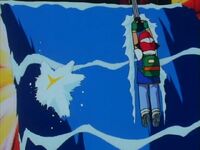 Ash hangs on the waterfall 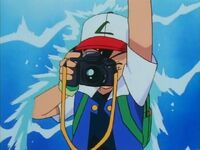 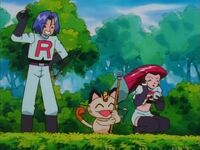 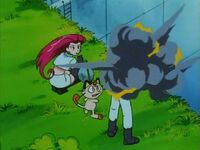 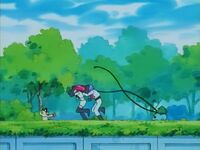 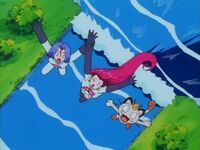 Team Rocket fall down the waterfall
Add a photo to this gallery
Retrieved from "https://pokemon.fandom.com/wiki/TB055:_Pokémon_Paparazzi?oldid=1289110"
Community content is available under CC-BY-SA unless otherwise noted.