Beauty and The Beach
アオプルコのきゅうじつ

Beauty and The Beach (アオプルコのきゅうじつ Holiday in Acapulco) is the 18th episode of the Pokémon: Indigo League.

Enjoying the beaches of Porta Vista, the heroes have a great time. However, they crash a boat in a ferry, making Moe, the owner of the ship, furious. They agree to work at his restaurant to pay off the damages, but Moe's rival, Brutella, employes Team Rocket to sabotage their business. Misty decides to participate in a local beauty contest to drum up business, so Brutella orders Team Rocket to interfere in the Contest. Will Moe get the money he needs to pay the damages? Also, what does Gary, Ash's rival, have to say in front of the audience?

Ash, Misty, and Brock have finally made it to Porta Vista. The moment they get there, Ash and Brock immediately get on their swimsuits and jump into the ocean. Misty, also wearing a swimsuit, joins them a few minutes later. Brock and Ash stare at her and she asks them why they are looking at her funny. Ash laughs and says, "It's unusual to see you looking like a girl!". Misty angrily throws a beach ball in his face.﻿

Team Rocket, using their Gyarados submarine spy on everyone at the beach from their submarine. They decide to steal money from the wealthy tourists. Suddenly, Jessie sees a boat quickly heading towards the submarine. The boat's driver is Brock, who thought Ash borrowed it because Pikachu was on it. The boat collides into the submarine and smashes into the dock. Moe, the boat's owner, comes to look at the damage. Ash, Misty, and Brock promise Moe that they will pay for the boat to be fixed and Moe agrees to this.

Meanwhile, Team Rocket's sub has washed up onto a beach and they are greeted by a woman named Brutella. James asks her if they can work for her restaurant so they can pay to have their sub fixed. Brutella agrees. Later, they discover that Moe's restaurant and Brutella's restaurant are rivals. For a while, Brutella's restaurant has more customers and Team Rocket makes fun of Ash and his friends because of this. Ash decides to use his Pokémon to help out around the restaurant. Squirtle and Pikachu hand out fliers advertising Moe's restaurant, Pidgeotto and Charmander help keep the grill going in the kitchen, and Bulbasaur helps Misty with her waitress job. This works well until Meowth comes in and sabotages everything causing more people to go to Brutella's restaurant. Ash apologizes for making things worse.

Brutella comes in with Team Rocket. She tells him that he needs to pay the money he owes her by tomorrow or she will take his boat as payment. Moe is worried because he doesn't think he will have enough money by tomorrow. He explains that he planned to take a world cruise on his boat. Ash encourages him not to give up his dreams.

Ash is surprised to see Professor Oak and his mother, Delia Ketchum, coming by. Professor Oak explains that the Beach Beauty and Pokémon Costume Contest is about to start soon and he suggests passing out fliers to the audience. He also suggests that Misty should enter and try to win some prize money to help Moe. Ash has Pidgeotto fly above the town, spreading fliers and filling up Moe's restaurant again.

As the contest starts, Moe sits with Delia and Professor Oak and explains how Ash encouraged him not to give up his dream. Delia explains to Ash that she and Professor Oak are in Porta Vista with the Pallet Town Volunteer Patrol. The contest starts, with Brock as the emcee. Misty is the first contestant and she uses her Starmie and Ash's Squirtle to make a UFO. Team Rocket's Ekans and Koffing are next and they are dressed as an Omastar. They are kicked off the stage by Gary and his cheerleaders, who are the next contestants. Gary takes the microphone from Brock and insults Ash, who jumps out of his seat and runs to the stage.

Backstage, Brutella tells Team Rocket she has fixed their sub and she knows they are a part of Team Rocket. She blackmails them and tells them to stop the contest and destroy Moe's restaurant. Jessie tells her that they break things without even trying.

Back onstage Ash challenges Gary to a battle, but Gary, always cocky, says he won't battle an amateur trainer. Brock steps between the two of them and stops them from fighting. Just then, the Gyarados submarine comes up out of the water. People start panicking, thinking a Gyarados is really attacking. Ash grabs the microphone and tells everyone it's just a submarine. Team Rocket fires a missile from the submarine. Ash sends out Pidgeotto and Charmander and they redirect the missile back to Team Rocket's sub. The sub crashes into Brutella's restaurant, destroying it.

Ash and his friends say goodbye to Moe, who is going on his long awaited cruise. Ash says goodbye to Professor Oak and his mom, who is holding a trophy.

"Surf's up, dude!" — Ash
"What's wrong, why are you looking at me like that?" — Misty
"It's just weird to see you lookin' like a girl." — Ash
"Well see how weird this looks. Ha!" — Misty
"Ha ha! Porta Vista's straight ahead and positively packed with wealthy tourists." — Jessie
"We'll hit the beach with our Gyarados sub, scare the wallets out of those beach bums and live the lifestyles of the rich and infamous." — James
"Champagne wishes and catnip dreams here we come." — Meowth
"Isn't this great Misty?" — Ash
"The boat's beautiful. Who's it belong to?" — Misty
"I don't know. Brock's the one who borrowed it. Guess he has some pretty rich friends." — Ash
"Ash, I didn't borrow it." — Brock
"You were the one who told me to come on board!" — Misty
"Only after I saw Brock get on." — Misty
"H-Hey wait a second. I was only following Pikachu." — Brock
"Pika." — Pikachu
"I think we're in trouble." — Ash
"You remind me of my granddaughter." — Moe to Misty
"We don't have any money but we'd be happy to work to pay for any damages." — Misty
"You would?" — Moe
"I mean-uh, They'd be happy. Ha ha." — Misty
"I wanted to hit the beach, but not like this." — Meowth after recovering
"This beach is for my restaurant patrons only, and I don't need no squatters." — Brutella's first line.
"Workin' for me ain't no picnic. I can be brutal." — Brutella
"Hahahahaha. We work with Jessie so we know all about brutal." — James
"Hahahahahahaha. Flyers." — Meowth
"You have to follow your dream no matter what. It's always been my dream to become the world's greatest Pokémon trainer, and even though it isn't that easy I'm gonna do everything I can to make it come true. Please, Moe. Please don't give up, you can't give up. Not when your dream is so close to coming true." — Ash's speech
"Hi Ash, surprised to see me too?" — Delia
"Your mother's been worried about you Ash, she says she still thinks of you as her little pumpkin." — Professor Oak
"That makes me sound like a baby." — Ash
"You'll always be my baby. Won't you?" — Delia
"Y-yeah." — Ash
"Well I just hope you aren't eating a lot of junk food and getting into any trouble." — Delia
"Of course not, uhh." — Ash
"At least not a lot of trouble." — Ash
"I'm the one who got into trouble, Mrs. Ketchum. Ash helped out at my restaurant when I really needed help. But even more importantly, your son has been a great inspiration to me." — Moe
"That's wonderful. What a relief." — Delia
"Thanks Moe." — Ash
"This is totally embarrassing and degrading but we need the money." — Misty
"This is Misty, the lovely and talented water Pokémon trainer, who's sure making a big splash here today. Now let's take a look at the costume she and her Pokémon have created." — Brock introducing Misty
"I uh forgot to mention that my grandson came along with us." — Professor Oak
"That's great." — Ash
"Gary, Gary, He's our man. He'll trash Ash, we know he can." — Gary's Cheerleaders
"We'll see who trashes who!" — Ash mad at Gary
"With a build-up like that, none of the judges'll give me a second look." — Misty
"You can count on us, destroying things is our speciality." — James
"We're so good, we destroy things without even trying." — Jessie
"We'll give it our worst shot." — Meowth
"Alley-oops." — Meowth getting into the sub
"I think you should be very proud of your little pumpkin." — Professor Oak
"I am proud Professor. Proud of my... young man." — Delia 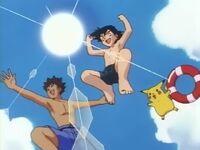 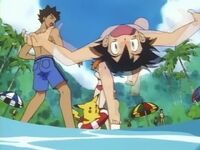 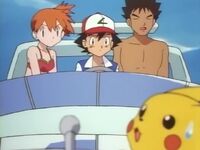 Pikachu led the gang to the boat 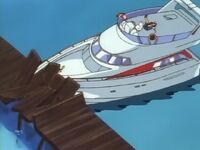 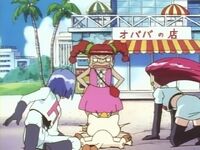 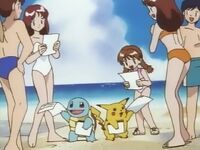 Squirtle and Pikachu give the posters 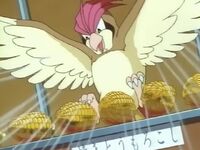 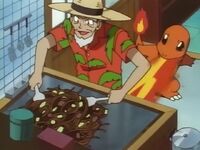 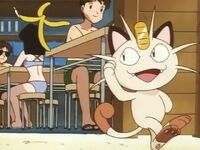 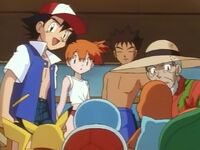 Ash tells of the importance of the dream 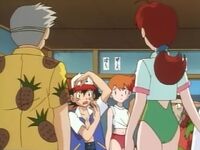 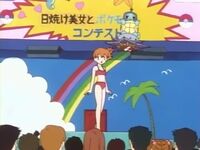 Misty goes to win the contest 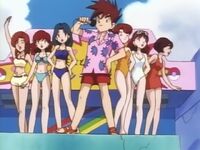 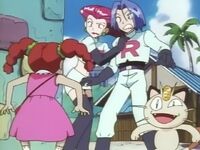 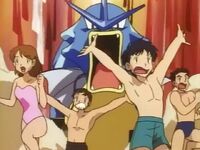 The submarine goes to scare off the people 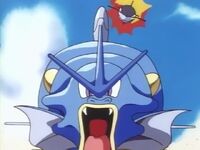 Team Rocket's submarine runs away from the projectile
Add a photo to this gallery
Retrieved from "https://pokemon.fandom.com/wiki/TB018:_Beauty_and_The_Beach?oldid=1328090"
Community content is available under CC-BY-SA unless otherwise noted.