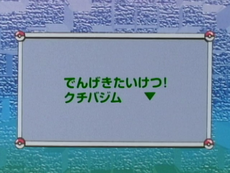 After a long journey, the heroes make it to Vermilion City. After their lunch, Ash, Brock and Misty go inside the Gym and meet the Gym Leader, Lt. Surge. Lt. Surge's Raichu is quite powerful and defeats Pikachu. Ash, not wanting to give up, is offered a Thunder Stone to get Pikachu to evolve into a Raichu. Will he evolve his first Pokémon or make a different strategy to defeat Lt. Surge?

After two weeks of traveling, Ash, Misty, and Brock have finally reached Vermilion City. Brock and Misty cannot wait to eat but Ash wants to go to the gym first. Brock tells him to wait because Pikachu wasn't in good enough shape to battle. Ash agrees and they all head to the Pokémon Center. At the Pokémon Center, Nurse Joy promises that she would take good care of Pikachu. Nurse Joy notices that they looked surprised. She explains that all of the Nurse Joys were related and they all look alike. She claims that she is the cutest one and Brock agreed. Suddenly, the doors open up and Chansey and a trainer run in. On a rolling table is a very hurt Rattata. Brock wonders what had happened and Nurse Joy reports that is the 15th one this month. They go to a room with a lot of hurt Pokémon in it. Pokémon such as Caterpie, Oddish, Sandshrew, and Rattata are seen there. Nurse Joy explains that they all lost to the mysterious Vermilion City Gym Leader, Lt. Surge. Ash starts to get worried that Lt. Surge will be tough to beat and Misty makes fun of him for getting scared.

Ash claims that a Badge is a Badge. Misty replies if Ash is so strong, why doesn't he prove it at Vermilion City's Gym. Misty reminds him that she and Brock gave Ash his badges, so they would look bad if he got beaten by Lt. Surge. Ash goes to strike on Misty, but Nurse Joy stops him, reminding him that he's in a hospital. Nurse Joy jokes that since they were fighting, they must really care about each other. Ash and Misty angrily and quickly deny this. They all hear the sound that meant Ash's Pokémon were fully healed. Pikachu happily eats an apple and Ash lets him know it was time to go to the Gym.

Just then, another trainer with a hurt Pidgey comes in. Misty concludes that they must have come from the Gym. Pikachu gets scared and does not want to go to the Gym. Ash gets mad at him for being a coward and Pikachu wonders if Ash cared whether Pikachu was going to end up like the Pidgey. Ash tells that Pikachu had a point, but tells him not to worry because they were going to win. Pikachu still does not want to go and protests so much that he electrocutes Ash. Misty says that Ash and Pikachu must care a lot about each other if they fight that much.

Outside the Gym, Misty tells Ash that it isn't too late to back out now but he still wants to go in and win. They end up arguing again until Brock stops by asking if they were ever going to go inside. They enter the Gym and Ash says he's ready to earn his 3rd badge. Lt. Surge's male assistant say there's another one for the ER room and Lt. Surge enters. Lt. Surge says he's happy his next challenger is a cutie and says he will not go easy on Misty. Misty says that she's not the challenger, Ash is. Lt. Surge laughs when he sees that Ash has a Pikachu, calling them little baby Pokémon, making Pikachu mad. Ash asks why he was making fun of Pikachu and Surge responded by showing off his Raichu—Pikachu's evolved form.

Lt. Surge says that it wasn't too late to back out now, but Ash stands on the spot, as does Pikachu. Lt. Surge laughs again stating that Electric-type Pokémon is only useful if it has been evolved and knows all the moves it can learn. Ash retorts that there's more to training Pokémon than forcing them to evolve, liking Pikachu the way he is.﻿ Surge's insults make Pikachu start to get really angry and his cheeks start sparking, prepared to battle Raichu. Brock is surprised when he sees how ready Pikachu is to battle. Surge says that they would soon learn that fighting the big boys would be a shocking experience. ﻿Pikachu and Raichu soon battle in the arena.

The battle starts, as Ash tells Pikachu to use ThunderShock. Raichu is not affected by it and uses ThunderShock itself, knocking Pikachu backwards. Brock realizes electric attacks wouldn't work and Ash should recall Pikachu. The former tries to call Pikachu to return, but the latter refuses. Surge gives Pikachu credit for being gutsy and tells Raichu to use Mega Punch, followed by a Mega Kick, knocking Pikachu backwards again.﻿

Outside, Team Rocket is watching the battle. They think that since Pikachu is getting beaten up, they shouldn't steal it after all. Meowth thinks that they should steal Raichu and Jessie and James whacks him on the head as they start cheering for Pikachu, but see that Raichu's victory is imminent. The battle ends when Raichu gives Pikachu a Thunderbolt so powerful and brutal that it leaves him badly injured and almost paralyzed.﻿

At the Pokémon Center, a wounded Pikachu wakes up in a hospital bed and Ash is happy that it is okay. Pikachu is still unhappy that it got beaten up by Raichu. Nurse Joy comes in and said there might be a way for Pikachu to win. She says she found a Thunder Stone and gives it to Ash to use on Pikachu. The latter whacks it away, refusing it. Outside, Meowth starts crying, explaining that Pikachu would never want to be Raichu's equal, it wanted to win as a Pikachu for the respect of Pikachu everywhere and it will defend its honor and that of its trainer. Brock has an idea for a way Pikachu could beat Raichu.

The next day, they all walk over to the Gym to try it out. However, they are stopped by Team Rocket (with disguises). Jessie and James attempt to say the motto, but Meowth stops them by whacking them. They show support for Pikachu and runoff. Brock is disturbed, but Misty cheerfully waves them off (Team Rocket were surprised when she knows them). They enter the Gym once again, where Ash demands a rematch. Surge laughs, saying that they must have come up with a new way to lose. Surge sends out Raichu, who uses its tail to hit Pikachu, followed up with Body Slam. Lt. Surge orders another Body Slam to finish things off, but Pikachu was able to get up and uses Agility. Raichu tries to use Body Slam, but the former is way too fast for it. Brock admits the strategy: Lt. Surge evolved Raichu too soon and it never got a chance to learn any speed attacks as Pikachu. Lt. Surge is mad, having Raichu use Thunderbolt, which blows out all the windows in the Gym. Lt. Surge saw that Pikachu dodged the attack by standing on its tail. Lt. Surge orders Raichu to use Thunderbolt again, but the latter used up all its electricity. Pikachu uses Quick Attack and Raichu uses Take Down, but the former was quicker and hits the latter. With a shocking tail, Pikachu defeats Raichu.

Everyone congratulates Ash and Pikachu, even Raichu, who shows its respect for Pikachu. Ash is given his Thunder Badge and gives Pikachu a victory hug, shocking the former, so much that in the eyes of both the stars flare. Brock and Misty see that Ash and Pikachu are the best couple while they cheer. Outside, Team Rocket walks towards the sunset and James realizes that they never tried to catch Pikachu and they wasted the whole day cheering for "the good guys", which makes Jessie and Meowth feel nervous.﻿

"Hello, I've come for a Pokémon battle, to earn a Thunder Badge." - Ash
"Hey boss, another victim for the emergency ward." - Male Assistant
"Which one?" - Lt. Surge

"A strategy? So they've been plannin' a new way to lose. Go Raichu!" - Lt. Surge

"Ok Raichu, give it a Thunderbolt. Shut it down!" - Lt. Surge
"What a shocking story." - Jessie
"That was quite a tail." - James
"And now you've both been pun-ished. *laughs*" - Meowth after punching Jessie and James
"Koffing!" - James's Koffing

The gang arrived to Vermilion City

Everyone is exhausted and hungry

Ash and the Thunder Stone

Pikachu has to decide a path

Raichu is out of power

Team Rocket realized they wasted their day cheering for the good guys
Add a photo to this gallery
Retrieved from "https://pokemon.fandom.com/wiki/TB014:_Electric_Shock_Showdown?oldid=1330204"
Community content is available under CC-BY-SA unless otherwise noted.