Bulbasaur and the Hidden Village
かくれざとのフシギダネ

Going on a wrong path, the heroes spot an Oddish, which Misty nearly captures, if it weren't for a Bulbasaur. Going further, the heroes trigger some traps, which Melanie, a caretaker made to stop the thieves. The thieves include Team Rocket, who appear to get all the Pokémon for themselves. Will the Bulbasaur Ash encountered ignore the tension and help save the village?

At the start of the episode, Ash, Misty, and Brock are lost and trying to find the path to Vermilion City. Ash and Misty are fighting, only this time they are fighting over who got them lost in the first place.

They stop to rest and Ash notices an Oddish taking a drink from a stream. Misty sends out her Starmie to battle Oddish so she can catch it. Oddish is defeated, but Misty's Poké Ball is deflected by a Bulbasaur. The Bulbasaur attacks and defeats Starmie. Ash sends out his Butterfree after Bulbasaur and uses Sleep Powder, but Bulbasaur blows the attack back at Butterfree. The Oddish and Bulbasaur escape into the bushes.

A little later, the three of them try to cross a rope bridge, but the wind rips it apart. Brock falls into the river below and Misty and Pikachu cling to Ash. Ash pulls them up and they make their way to the end of the bridge. They go down to water level and start looking for Brock. Almost immediately Misty falls into a hole in the ground. Ash pulls her out and they go farther down stream. Misty's foot catches on a rope and she, Ash,and Pikachu get stuck in a net. They are found by the same Bulbasaur from before.

Ash starts to think that Brock has been washed to sea and captured by pirates, when Brock appears with a knife and cuts them free. He tells them how he got out of the rapids. He says that he was rescued by an "incredibly beautiful" girl. Brock takes them to a small village and introduces them to the girl, Melanie.

Ash and Misty notice that there are many Pokémon in the village and wonder if they are Melanie's Pokémon. Brock explains that the village is a place for hurt or abandoned Pokémon to come and get better, then they leave. Melanie says that she collects plants to heal the Pokémon with, but she's not a qualified Pokémon doctor. Misty makes fun of Brock for falling in love with Melanie. Brock tells her to be quiet because he's afraid Melanie heard her.

Melanie explains that she set the traps because she wants to protect the hurt Pokémon from Pokémon Trainers. The scene then shifts to Jessie, James and Meowth carefully walking across the bridge. Jessie and James get excited about the Pokémon they can steal while Meowth says that they will cross that bridge when the time comes. Unfortunately for Team Rocket, the rope for the bridge breaks, causing the bridge to slam against the cliff, causing Jessie, James and Meowth to lose their grips on the bridge and fall into the river below.

Brock says that he promised Melanie that they wouldn't catch any Pokémon in the village. Misty agrees saying, "Only bad guys try to catch sick Pokémon." Ash worries if the traps are enough to stop thieves, "You have to be pretty stupid to fall into one of those holes," angering Misty in the process. The scene cuts to Jessie, James, and Meowth as Jessie exclaims, "This is the third hole we've fallen into!" They get out of the hole and get caught in the net almost immediately.

While Brock and Ash are healing a hurt Staryu, Misty apologizes to the Oddish that she tried to catch earlier. Bulbasaur tackles Misty, thinking that Oddish was in danger. Melanie explains that Bulbasaur volunteered to protect the whole village. Ash says that he wishes he had a Pokémon that brave.

Team Rocket appears on top of a floating stadium, dubbed Jessie Stadium by, naturally, Jessie and recite their motto but leaving out their names. Jessie squeals in delight that they are attacking, James comments saying that they have the home field advantage. Jessie, in return, confidently says "No such luck we're the home team now." They land in a clearing close to the village, announce the Team Rocket Pokémon Challenge and they use a giant vacuum to "invite" all the village Pokémon into the stadium. Brock leads everyone into the cabin, but Oddish is caught by the vacuum. Bulbasaur used Vine Whip to save Oddish. Ash helps by blocking the wind so Bulbasaur can get Oddish to safety, Bulbasaur taking note of this. Jessie complains about Ash's interfering but James mentions that all the Pokémon are in one place. The vacuum is so strong, it starts to pull the roof off the cabin until Bulbasaur used Vine Whip to stop the roof from flying away. Ash sends out Pidgeotto and tells it to use Gust. The Gust attack, combined with the vacuum's wind, creates a tornado. James cheerfully remarks that the tornado is about to wind up, but a catatonic Jessie utters "But will it strike us out?" Unfortunately for Jessie and crew, the tornado sucks the terrified Team Rocket up and all Jessie, James and Meowth can do is scream while flying around. Meowth wonders what they can do now and Jessie cries "Challenge them to wind surfing?" Meowth yells that Team Rocket is blasting off again as the tornado carries Jessie, James, Meowth and Jessie Stadium away, saving the village and the Pokémon.

Melanie asks Ash to take Bulbasaur with him, as the Pokémon are staying too long because Bulbasaur does such a good job of protecting the Pokémon. Bulbasaur agrees to go, but only if Ash defeats it in a battle. Ash chooses Pikachu to battle Bulbasaur. After both Pokémon exchange hits, Bulbasaur uses Vine Whip on Pikachu and starts tossing Pikachu around. Pikachu uses Thunderbolt and it defeats Bulbasaur, letting Ash to catch Bulbasaur. Brock offers to stay and help but Melanie tells him to continue his adventure. 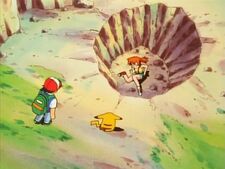 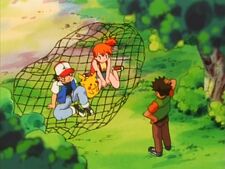 Brock explains to Pikachu, Misty and Ash on how he survived. 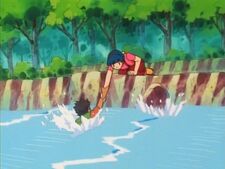 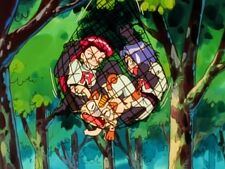 Team Rocket got captured in a net 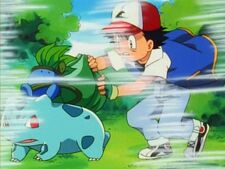 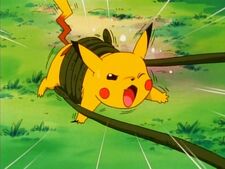 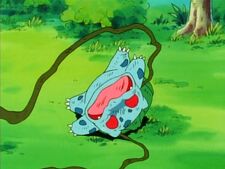 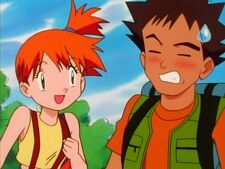 Brock still blushes about liking Melanie
Add a photo to this gallery
Retrieved from "https://pokemon.fandom.com/wiki/TB010:_Bulbasaur_and_the_Hidden_Village?oldid=1323559"
Community content is available under CC-BY-SA unless otherwise noted.