Challenge of the Samurai
サムライしょうねんのちょうせん！ 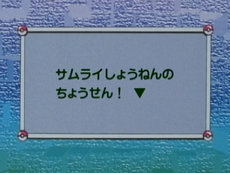 After getting his Caterpie evolved into a Metapod (which still makes Misty uneasy), Ash and Misty meet a samurai, who wants to test Ash's skill, just like the other trainers from Pallet Town. In the middle of the fight, a swarm of Beedrill take Ash's Metapod away. The samurai is not pleased with that and criticizes Ash for it. Will Ash get his Pokémon back without getting stung by a Beedrill?

The episode begins by recapping the events of the previous three episodes, starting with Ash Ketchum stating that he will become the number one Pokémon master of all time. Ash is then shown dragging Pikachu along and then the two being followed by a flock of Spearow. The episode then cuts to the Pokémon Center at Viridian City as Nurse Joy and her two Chansey bring Pikachu out on a stretcher and the arrival of Team Rocket, before showing the explosion that destroyed the Pokémon Center. The next flashback shows Ash capturing first Caterpie and then Pidgeotto, before Caterpie evolving into Metapod.

A panoramic view of Viridian Forest is then shown, followed by Misty's scream after seeing another bug Pokémon, with Ash stating it might be a 'cowterpie' whilst dressed in a cow costume. Misty falls over in contempt and points to where she saw the bug Pokémon, with a Weedle moving closer to them. Ash points the Pokédex at Weedle and learns about it before going to throw a Poké Ball. He remembers, however, that he needs to weaken Weedle and calls on Pikachu, who is sleeping. Ash states that Pidgeotto and Metapod give him the respect he deserves, so Ash sends out Pidgeotto.

Pidgeotto starts the battle by using its Gust attack and then begins to dive, causing Weedle to be sent flying by the wind caused by the dive. Misty walks away and is ambushed by a man in a suit of armor who pulls his sword out, asking if she is a trainer from Pallet Town. She says no and he walks away, telling her not to shriek to avoid attracting a Beedrill swarm. Weedle attempts to use its Poison Sting attack but Pidgeotto dodges and dives once again, causing Weedle to be weakened. Ash gets his Poké Ball ready but is interrupted by the man with the sword, who reveals his name to be Samurai. Samurai then challenges Ash, whilst Weedle recovers and manages to escape, as Ash throws his Poké Ball against a tree, just missing Weedle.

Ash recalls Pidgeotto but quickly sends it back out. Pidgeotto, tired from battling Weedle, is forced to battle Samurai's Pinsir and uses Sand Attack but is taken out of the battle by a Tackle attack from Pinsir. Ash recalls Pidgeotto and sends out his Metapod. Samurai tells Ash that his Metapod will be cut in half by Pinsir's pincers and Misty tells Ash to recall Metapod, as 'not even a bug Pokémon deserves this'. Ash has Metapod use Harden and, when Pinsir attempts to crush him with his pincers, the pincers break, resulting in Pinsir being recalled. Samurai then sends out his own Metapod and has it use Harden, as Ash does with his Metapod. The battle continues throughout the day with the two continuing to use harden, whilst Misty and Pikachu sun bathe whilst waiting for the match to end.

Jessie, James and Meowth are then shown walking through Viridian Forest. Jessie and James are carrying their anti-Beedrill tank, whilst Meowth rides on top sunbathing. James complains about having to carry the tank, but Jessie tells him that it is worth it to avoid a Beedrill sting. Meowth then tells them to get a move on and that he can not help because he is the lookout, resulting in the two tipping the tank to throw Meowth off, with Meowth then running to catch up.

The match between Ash and Samurai's Metapods is again shown, with Ash and Samurai falling over due to their continued exposure to the sun. A Beedrill swarm then appears in the distance and Samurai recalls his Metapod and runs away. A Beedrill flies down and steals Metapod, which Ash attempts to recall. Another Beedrill attempts to attack but Pikachu uses its Thundershock on Ash, Misty and the Beedrill to send it flying away. The three begin to run off, catching up with Samurai, but manage to avoid the Beedrill by hiding behind a bush. The three, however, run into a hive of Kakuna. Ash spots Metapod and talks loudly, resulting in the Kakuna noticing them and evolving into Beedrill.

Ash, Misty, Pikachu and Samurai are once again forced to run away, just making it to Samurai's cabin. Two Beedrill use their stingers against the cabin, but manage to escape, with two Beedrill being visible through the door. Samurai takes off his armour and tells Ash that it is his fault that Metapod was stolen, calling him a novice. Ash protests but Samurai sticks by his words, saying that the other trainers from Pallet Town would not have been so irresponsible. Three flashbacks then begin, first showing a Charmander battling his Pinsir, Squirtle battling his Metapod and a Bulbasaur battling Pinsir. Samurai tells about his training to defeat a trainer from Pallet and calls Ash a joke in comparison to the other trainers from Pallet, including Gary Oak. Misty and Samurai fall asleep whilst Ash continues to think about Metapod.

The next morning Ash sneaks up on the tree where the Beedrill and Kakuna are sleeping, to try and retrieve Metapod. Meowth jumps on Ash's head and uses his Scratch attack on Ash. Jessie and James then appear and begin to recite their motto, with Ash interrupting to warn against their talking so loud, to avoid waking the Beedrill. Jessie and James, however, continue and use fireworks at the end of the motto, which wakes the Beedrill and Kakuna. Ash then begins to run towards the tree and manages to dodge the Beedrill by diving on the ground. Team Rocket quickly realize that the Beedrill are now focused on attacking them. Jessie reminds them of the tank and James lifts it up, but the trio is shocked to discover that is being eaten by Weedles. Now without the tank to protect themselves, Jessie, James, and Meowth are forced to scream and run away from the Beedrill.

Ash finds Metapod, apologizes and tells him to get into his Poké Ball, but the Metapod refuses. Ash picks Metapod up and runs away with Metapod in hand but falls over whilst trying to run away from a Beedrill. Ash again apologizes for his abandoning Metapod. Beedrill attempts to use its Twineedle attack on Ash but Metapod throws itself in the way to save Ash, just as Misty, Pikachu and Samurai appear. The Beedrill flies away and Metapod evolves into Butterfree. Ash then has Butterfree use its Sleep Powder attack to make the Beedrill fall asleep, with Team Rocket also being caught.

Samurai then congratulates Ash on handling his Butterfree so well so quickly after evolving. Samurai then shows them to the edge of the forest and tells them that the trail will lead them to Pewter City. Ash tells Samurai that they need to finish their battle but Samurai refuses, saying that compared to Ash, he is the novice. The two agree to have another match when they meet in the future, with Misty saying for them not to battle Metapod against Metapod again. Team Rocket are then shown hiding in the Beedrill tree dressed up as Kakuna. The three begin to argue over their lack of ideas. Jessie loudly protests when Meowth says that her ideas are 'all bad', waking a nearby Kakuna, then the Kakuna wakes up the Beedrill. The camera then cuts to another panoramic view with screams from Team Rocket being heard, due to Beedrill attacks, as the episode ends.

Misty is still frightened about bugs

Sleep Powder put everyone to sleep

Team Rocket in their Kakuna costumes
Add a photo to this gallery
Retrieved from "https://pokemon.fandom.com/wiki/TB004:_Challenge_of_the_Samurai?oldid=1330178"
Community content is available under CC-BY-SA unless otherwise noted.