Pokémon Wiki
Register
Don't have an account?
Sign In
Advertisement
in: Pokémon: Indigo League episodes, Season 1 episodes, Episodes in which a main character is introduced,
and 5 more

Title
Pokémon - I Choose You!
Airdate(s)

Pokémon, Escolho-te a Ti!
(Pokémon, I Choose You!)

Pokémon that appeared on Ash's TV

For other title cards, see here
Pokémon - I Choose You! (ポケモン！きみにきめた！, Pokémon! Kimi ni Kimeta!, Pokémon! I Choose You!) is the 1st episode of Pokémon: Indigo League.

Meet Ash Ketchum, a 10-year-old boy full of imagination, confidence, and dreams that are almost too big for his village of Pallet Town—plus the desire to become a Pokémon Master![1]

A battle between a Nidorino and Gengar is broadcast on the television and, after Gengar gets the advantage, Nidorino is called back and switched for Onix. The cameras then show ten-year-old Ash Ketchum watching the battle on television until he is interrupted by his mother. She tells Ash to go to sleep. Ash protests and she changes the channel to a program with Professor Oak describing the three Pokémon he can choose from in the morning: the grass type Bulbasaur, the water type Squirtle and the fire type Charmander. Ash falls asleep and dreams about owning a Bulbasaur and then a Squirtle, talking about the advantages in his sleep. The next morning, Ash dreams about owning a Charmander, throwing a Poké Ball, which turns out to be his alarm clock, designed to look like a Voltorb.

When the alarm clock hits the wall Ash wakes up and rushes, still in his pajamas, to Professor Oak's laboratory to collect his first Pokémon. Ash, however, runs into Gary Oak, the professor's grandson, along with the people of Pallet Town, who, along with Gary's cheerleaders, show their support for Gary. Gary tells Ash that he already got his Pokémon, although he does not tell Ash which Pokémon he chose. Gary, who tells Ash that he is already behind, leaves with his cheerleaders and the townsfolk following. Professor Oak then appears, telling Ash that he is late. The two go inside, where the Professor tells him that the three starter Pokémon have been taken by Trainers who were on time.

The Professor tells Ash that there is still one Pokémon left, a Pikachu. Professor Oak then warns Ash that it might not be a good idea to choose Pikachu. However, Ash decides to take Pikachu, but Pikachu is not as happy and electrocutes Ash. Oak then gives Ash his Pokédex and Poké Balls, with Pikachu electrocuting both Ash and Professor Oak. Ash then leaves the laboratory and is greeted by his mother and the people of Pallet Town. His mother is impressed with choice but Pikachu electrocutes Ash's mom and the crowd. Ash is given his backpack filled with supplies and some advice from his mother, and leaves, literally dragging Pikachu behind him, after tying a rope around Pikachu's waist and using rubber gloves to protect himself.

After dragging Pikachu along for a while, he decides to try and improve his relationship with Pikachu by untying him and taking off the rubber gloves. Pikachu, however, continues to ignore Ash's instructions, including when he asks Pikachu to attack a Pidgey. Ash throws a Poké Ball and almost captures Pidgey, who escapes and runs away, with Pikachu happily laughing at Ash's failed attempt. Ash then decides to sneak up on Pidgey, hiding behind his pajama top, later using it to trap Pidgey, who escapes using its Gust attack and then its Sand Attack. Pikachu continues to laugh at Ash, who then watches a Rattata steal food from his backpack.

Ash, more determined than ever, turns around and spots three Pidgey, including the one he had tried to capture. Ash throws a rock but misses, with the three Pidgey flying away. Ash then spots another Pokémon and throws a rock, and hits his target. The Pokémon, however, is a Spearow, who begins to attack Ash and then Pikachu. Pikachu used Thunder Shock to scare Spearow away, although Spearow cries out and a whole flock begins to attack Ash and Pikachu, who run away but are easily caught and attacked by the Spearow. Pikachu, who had run ahead of Ash, takes a lot of damage before Ash arrives to scare away the attacking Spearow.

Ash picks Pikachu up and runs to a cliff edge, where he decides to jump off and into the water below, where he sees a Magikarp and a Gyarados. He then grabs a fishing lure and is pulled out by Misty, who questions Ash about the state Pikachu is in, telling him of a nearby Pokémon Center. Ash takes her bike and cycles off towards the Pokémon Center, with the flock of Spearow following behind them. Ash crashes the bike and crawls over to Pikachu, putting a Poké Ball out for Pikachu to enter, to protect it from the attacking Spearow. Ash then stands up to the Spearow, challenging them to attack him. Pikachu, seeing Ash's courage and determination to protect him gets to his feet and climbs onto Ash's shoulder, jumping into the air and using a lighting bolt to release a strong Thunder Shock attack, which scares away the Spearow flock.

Later on, when the storm clears, Ash and Pikachu wake up. Ash tells Pikachu that they beat the Spearow Gang and Pikachu nods in agreement. Ash looks up into the sky and sees a mysterious flying Pokémon in the sky towards a rainbow. The Pokédex can give Ash no information as it was not registered in it and tells Ash that there were still more Pokémon which have not been discovered. Ash and Pikachu decide to walk on towards the Pokémon Center in the next city (Viridian City), as Misty's bike is too badly damaged to use. The two continue walking and eventually, from a hilltop, are able to look down on the city as the episode ends.

"Bulbasaur, Charmander, Squirtle — any one's fine. Just please save one for me!" - Ash

"You look like you're ready for bed, not Pokémon training. I don't think you're going to train in your pajamas." — Professor Oak

"The early bird gets the worm, or in this case the Pokémon." — Professor Oak about Ash's final choice

"Oh you're playing catch, you're friends already." — Delia about Ash and Pikachu

"Spearows! Do you know who I am? I'm Ash from the town of Pallet. I am destined to be the worlds number one Pokémon Master. I can't be defeated by the likes of you. I'm going to capture and defeat you all. You hear me? Pikachu, go inside the Poké Ball it's the only way. Come and get me!" — Ash's first speech

Ash runs to the laboratory

Gary brags about the Pokémon he got

Finding out that all starter Pokémon have already been taken

Pikachu getting released from the Pokéball

Pikachu refuses to return to the Pokéball

Ash fails to catch a Pidgey

A Spearow gets hit by the rock Ash threw

Ash jumps in the waterfall

A girl reels in Ash with her fishing rod

Pikachu strikes back to protect Ash

Ash spots an unidentified Pokémon in the sky 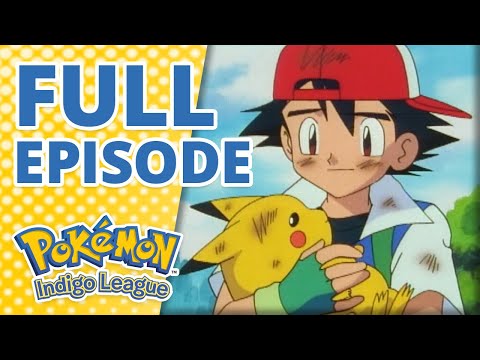