Sylveon (ニンフィア Ninfia) is a Fairy-type Pokémon introduced in Generation VI. It is one of the eight possible evolutions for Eevee.

Sylveon is a quadruped mammalian Pokémon with white-cream colored fur covering most of its slender body. The top of its head is a vibrant shade of pink, and it has long pink rabbit-like ears with dark blue insides. Sylveon has a short, blunt cat-like muzzle and a small black nose. Sylveon has two pink and white bow-shaped features -- one on its right ear, and one around its and neck. Attached to the bow-like features are scarf-like appendages with pink and blue tips that curl around Sylveon's body. It has four slender vulpine-like legs and small dainty pink-tipped paws and feet with three visible toes on each. Sylveon has two large blue eyes with white pupils, and two pointed teeth on its upper jaw, seen when its mouth is open. It has a fluffy pink tail that curves inward slightly to form a crescent shape, similar to a dog's tail.

The Shiny variation of Sylveon has inverse coloration, with blue and red fur (replacing the pink patches and the blue in its ears), and reddish-pink eyes.

Sylveon is a kind and gentle Pokémon, it uses its charm to hunt in the wild. It uses its ribbon-like feelers to hold hands with its trainer and walk alongside them. It can bring even the most intense battles to a halt by using its feelers to exude an aura of peace and tranquility, causing those near it to lose their fighting spirit. Its movements are graceful and fluid, making it appear almost weightless. Sylveon is also very attractive to other Pokemon.

Sylveon can possess the Ability Cute Charm, which may cause the opposing Pokémon to be infatuated if it physically attacks it and is the opposite gender. In Dream World, Sylveon may have the ability Pixilate, which turns all Normal-type moves used by the Pokémon into Fairy-type moves.

Eevee evolves into Sylveon when leveled up knowing a Fairy-type move, and gaining at least two Affection hearts in Pokémon-Amie and Pokémon Refresh

"Sylveon the intertwining Pokémon. Sylveon affectionately wraps its ribbon like feelers around its trainers arm as they walk together."

Sylveon also appeared Kindergarten Chaos! which belonged to a woman named Penelope. In the episode, it and Pikachu is captured by Team Rocket and rescued by Ash and Randell. It was last seen with its trainer waving goodbye to Ash and his friends. Valerie used a Sylveon against Ash's Talonflame during the Gym battle. Serena's Eevee evolved into Sylveon during a tag battle at a dance party.

Like all Eeveelutions, Sylveon is based on various mammalian creatures such as vulpine, feline, and canines alike. Its traits are most similar to a feline or a vulpine, such as its slender vulpine-like legs and feline muzzle, but it has rabbit-like ears and a tail similar to a canine.

Sylveon's name likely comes from the word "sylvan" meaning "of the forest", due to legends of fairies residing in forests, and "eon". It might also include "sylph" a mythological spirit of the air.

Its Japanese name "Nymphia", (translated from "Ninfia") is based off from the nymph, a fairy-like deity that resides in certain landforms. It's feminine appearance can relate to the nymphs, who are female deities. Another name for the nymph can also be sylph, which relates to the English name of Sylveon. 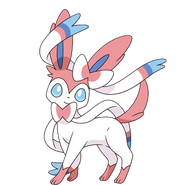 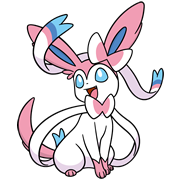 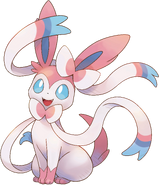 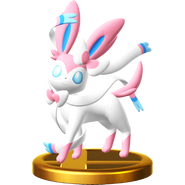 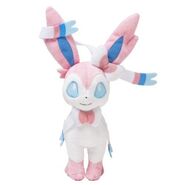 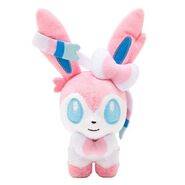 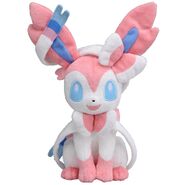 Add a photo to this gallery
← Aurorus | Sylveon | Hawlucha →
Retrieved from "https://pokemon.fandom.com/wiki/Sylveon?oldid=1039873"
Community content is available under CC-BY-SA unless otherwise noted.