It appears as if its skating on water. It draws prey with a sweet scent from the tip of its head.

Surskit has no pre-evolutionary stage, and evolves into Masquerain at level 22. 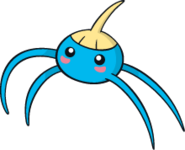