Sunkern are small, seed-like Pokémon that resembles a sunflower seed. They have black, oval shaped eyes with a sprout coming out the of their yellow/black bodies.

Sunkern's entire life is centered around its evolution into a Sunflora. It moves as little as possible, trying to preserve the energy and nutrients it requires for the evolution process.

According to the Pokédex, Sunkern's diet is said only to be morning dew, which collects under the leaves of plants beneath it.

Sunkern evolves into Sunflora with the use of a Sun Stone.

This Pokémon learns no moves by Breeding. 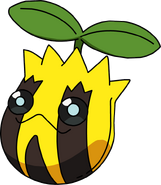 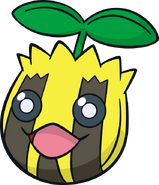 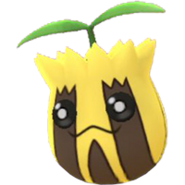