Stunfisk is a flat fish-like Pokémon. Its body is mostly a muddy brown color, which allows it to camouflage as it hides beneath the water. It has two short brown fins on either side of its flat body, and a bright yellow tail fin. Two yellow markings run down its back. It has round eyes with black pupils, and pale brown lips. A yellow exclamation marking runs from its tail to the center of its body.

Its Galarian form is gray with green markings resembling grass. Its tail and the front section of its body resembles a bear trap's sharp teeth. Its fins are more square-shaped and have visible digits. Its jaw now has teeth and resembles a Poké Ball.

Despite looking seemingly sluggish, Stunfisk are cunning predators. They hunt by burying themselves in sand, then zapping anyone who steps on it, while smiling. If it can't paralyze the target, they will flee by contorting their bodies to flop away.

In Galar, Stunfisk hunt instead by camouflaging into the dirt and lure the unwary with their Poké Ball-shaped mouth, similar to Foongus.

Stunfisk does not evolve.

Stunfisk is based on a flounder and a stargazer. It might also be based on a goosefish.

Its Galarian Form resembles a foothold traps such as a bear trap, which serves a similar purpose to its original origin of hiding in deep places and snatching up whoever steps on it. It may be based on the original concept of old bear traps, originally meaning to stun whoever stepped inside instead of clamping down. Its mouth resembles a Poké Ball, acting as the design of an overworld item and possibly playing off of the mimic-type enemy archetype in video games, which is also shares with Pokémon such as Voltorb and Foongus.

Stunfisk comes from stun and fisk (Danish for "fish"). 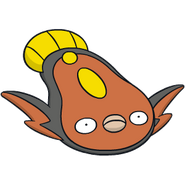 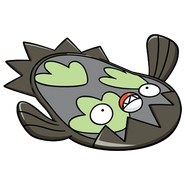 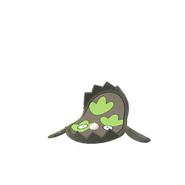