Stufful resembles a red panda and a plush doll.

Although a lot of ladies and children fall in love with them because of its adorable appearance, manners and soft fur, it actually detests being stroked and will continuously struggles by waving its paws. However, they won't struggle if they're near those they trust or comfortable with.

Despite having a small size, it has powerful strength. Anyone who gets by it suddenly, including the ones who are well-trained, will get severely injured.

Stufful made brief appearances since "A Dream Encounter!", prior becoming part of the major cast as of Don't Ignore the Small Stufful!. It was originally one of the Aether Foundation’s Pokémon before it first met Team Rocket Trio who have been infiltrating the foundation many times whenever Ash and his friends visiting there. It first met the Team Rocket Trio in some time after the recovery of Necrozma.

As its mother is often being a running gag on dragging Team Rocket away from the heroes to the “new blast”, Stufful becomes part of this gag, starting from Heart of Fire! Heart of Stone!, properly, where Stufful appears in front of Team Rocket, signals Bewear's incoming presences before them.

Stufful appears to be based on a red panda and a teddy bear.

Stufful might be a combination of stuffed, full, and struggle. 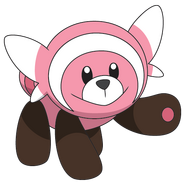 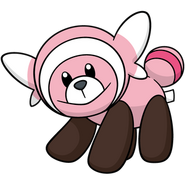 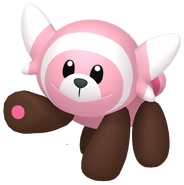 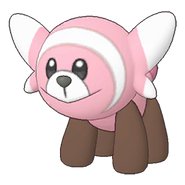