Stoutland is a bulky quadrupedal canine Pokémon. It is particularly fluffy, long-haired, and plump. Its long, thick fur is mostly blue in color with some brown patches. It has a very long "mustache", and a blue cloak of fur over its stout body (which swells slightly towards its rump) and tail. It has small paws and large ears on the top of its head. Also just like Herdier, it too has forehead hair in the shape of a "W". Its back is slightly humped (likely due to the great amount of blubber it likely possesses), with its highest point being towards the center of its back. It resembles a fat Yorkshire Terrier.

Stoutland has been known to rescue stranded humans on snowy mountains. Its thick fur acts as a natural insulator that keeps out the cold. Because of its trustworthy and loyal disposition, Stoutland is often used for rescue teams. Even after being caught in the wild, Stoutland will immediately warm up to its human companion within three days. Social standing is determined by the length of a Stoutland's mustache.

Lenora owns a Stoutland and used it in the gym match against Black.

Stoutland is likely based on an obese Yorkshire Terrier or Scottish Terrier with elements of Saint Bernards (its chubby build and its tendency to rescue people in mountains) and Shih Tzus. The shallow hump on its back may be derived from the more pronounced fatty humps of animals like Bactrian camels, yaks, and mountain goats, all of which, like Stoutland, are very capable in snowy mountains.

Stoutland may come from stout (fat, bulky, or sturdy, due to its overweight build and since it is built for rugged environments) and Scotland (since Yorkshire Terriers are Scottish).

Mūrando comes from ムチムチ (muchimuchi, plump or voluptuous, due to its obesity), 尨 muku (shaggy hair), and Scotland. It may also come from 村 (mura, town or village, due to its long relationship with humans) and ムキムキ (mukimuki, muscular, due to its strength). 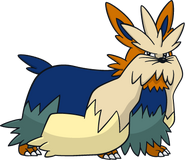 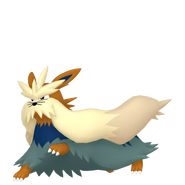 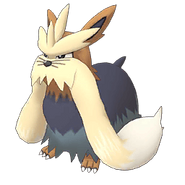 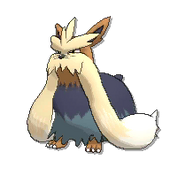 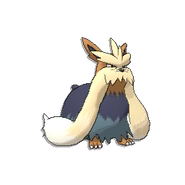 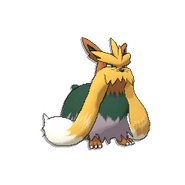 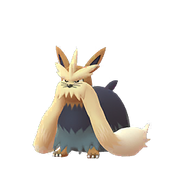