Stonjourner is based on a mobile Stonehenge. It has these two huge boulders as the legs and feet, a trapezoid-shaped rock for the head and body, and square-shaped rocks for the arms and hands.

They spend most of their time watching the sunrise and sunsets. They also gather in circles in an unmentioned date they will remain this way until the sun sets, and then disperse as if nothing had happened.These Pokémon were thought to have great significance to the ancient peoples of Galar, as stone circles imitating this Stonjourner ritual have been found littering the region. To this day, many Galarian myths and folklore surround Stonjourner and their peculiar behavior.Though they appear immobile, Stonjourner can actually deliver very powerful kicks with their huge, stony legs; they dislike being interrupted from their sun-gazing and will retaliate this way if bothered.

Like Tsareena and Hitmonlee, they have excellent kicking skills, as well as supposedly great speed.

The design of Stonjourner is based on the structures making up Stonehenge from Wiltshire, England. Stonjourner's strange behavior of forming a circle with others of its kind may reference Stonehenges ties to astronomy and facts that state that the monument used to be visited once a year by ancient people. It also resembles modern inuksuit, a manmade stone structure that is theorized as being used for navigation.

Stonjourner comes from the word "stone", "journey", and "sojourner". 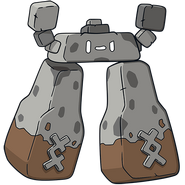 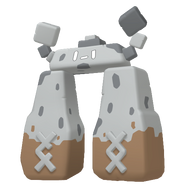