Steven's artwork for Omega Ruby and Alpha Sapphire, and Ruby, Sapphire and Emerald.

Steven Stone is a character in the Pokémon franchise. He is the Pokémon League Champion in Pokémon Ruby and Sapphire who specializes in Steel-type Pokémon. He was not the champion in Pokémon Emerald but was still an extremely strong trainer the player character could face after beating the game. He is also mentioned in Platinum and appears in HeartGold and SoulSilver. He seeks the secret of Mega Evolution and returned as the Champion again in Omega Ruby and Alpha Sapphire.

Steven is a tall, thin young man with ice-blue hair and eyes.

Steven wears a white undershirt with a black overcoat that has purple zig-zag streaks going down along with a red tie. On the ends of his sleeves he has silver cuffs. He also wears black pants with dark-purple dress shoes.

Steven's appearance remains the same as it is in Ruby and Sapphire.

Steven wears a charcoal jacket with two black zig-zag stripes, a white undershirt and a red tie. Steven wears skinny black pants and black shoes with low heels, as well as metallic jewellery on both of his sleeves and his index and ring fingers. He has a pin on his jacket, called the Mega Stickpin, which holds his Key Stone for Mega Evolving his Metagross.

Steven Stone is a young man who enjoys collecting various rocks and stones around the world. He is very humble and down-to-earth despite his extraordinary Pokémon battling skills. He does not like to brag and is generally a quiet and solitary person. Steven is also wise, knowledgeable, and very kind and generous. In the games, he will give the player character various helpful tips and items.

In Platinum, the player is told that the villa he receives in the fight area is previously owned by Steven.

In HeartGold and SoulSilver, Steven is found in the Silph Co. building after the player defeats Red. He asks which stone the player likes and then gives him or her one of the Hoenn starters with the stone that corresponds to the color of the stone the player chooses. The player can also trade him a Forretress to receive a Beldum in return. He can also be found inside the Pewter Museum related to the Legendary Pokémon Latios/Latias event.

In Black 2 and White 2, Steven can be battled at the Pokémon World Tournament in the Champions Tournament.

In Omega Ruby and Alpha Sapphire, Steven is looking for the secret of Mega Evolution with his Mega Metagross. Likewise, Steven performs all the actions he did in the original Sapphire and Ruby games, including giving the player instructions. He appears after the Trainer defeats Mauville City Gym Leader Wattson to activate the Latios/Latias event. He can also be teamed up with to play through the Double Battle section of the Battle Resort. He will always use the same two Pokémon when teamed up with. Steven also teams up with the player in various battles in the game, including the battle in the Mossdeep Space Center in the Delta Episode. 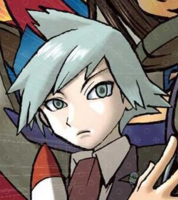 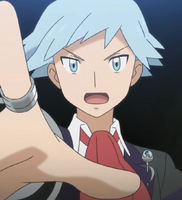 Steven's Battle VS Scene in Omega Ruby and Alpha Sapphire

Steven in the Delta Episode in Omega Ruby and Alpha Sapphire.

Steven with his Mega Metagross.