Unlike her pre-evolution, Steenee likes playing with other Pokémon. Unluckily, she is very hard to live with it, since she becomes more mischevious than before.

Steene is the evolved form of Bounsweet as of level 18. She evolves into Tsareena when she levels up at level 29 while knowing Stomp.

Steenee and her evolutionary relatives, Bounsweet and Tsareena, share their category with Tropius. They are all known as the Fruit Pokémon.

Steenee appears to be based on a mangosteen and a young girl.

Steenee's name includes teeny-weeny, slang for tiny, mangosteen a type of berry in which Steenee is based on, and "teen", referring to her slightly aged look from Bounsweet. 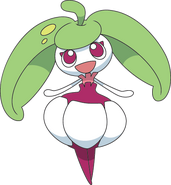 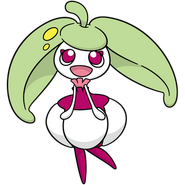 ShinySteeneeSprite.png
Add a photo to this gallery
← Bounsweet | Steenee | Tsareena →
Retrieved from "https://pokemon.fandom.com/wiki/Steenee?oldid=1047856"
Community content is available under CC-BY-SA unless otherwise noted.