While Stakataka may appear to be made up of stones stacked atop one another, apparently each “stone” is in fact a separate life-form, and this UB is made up of an assemblage of these life-forms.

When confronting another, or when feeling particularly enraged, the eyes on each of these stones begin to glow red. It is mostly enrage when something that are far heavier than Stakataka like statues being put on the top of its head, causing it to shake the heavy objects off its head to calm itself down. In SM085, if someone manages to successfully ride on top of Stakataka when angered the Ultra Beast will obey that person's commands.

Stakataka resembles a tower or castle wall. It may resemble a Nurikabe, a mythical yokai that is known for blocking the way of people. It also resembles a Mokumokuren, a mythical yokai that took the form of a wall with many eyes. It could also take inspiration from the Naveta d'Es Tudons Pyramid, a stone brick pyramid made up of human bodies, explaining why all of the bricks of Stakataka are said to be separate life-forms. As it's made of multiple individual organisms, it may also be based on organisms like coral, pyrosomes, siphonophores, or bryozoans, which are made of multiple individual units that form a single structure. As it's an extraterrestrial Steel-type Pokémon made of multiple individual organisms with one mind that resembles a cube, Stakataka may also be based on the Borg Collective from the Star Trek series, a hive-minded race of alien cyborgs that pilot cube-shaped spaceships.

"Stakataka" is a portmanteau of "stack," "attack," and "attacker." It may also come from 高い (takai, Japanese for "tall"). 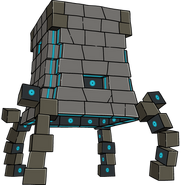 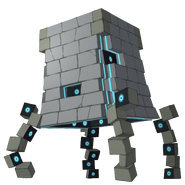