Spritzee (シュシュップ, Shushuppu) is a Fairy-type Pokémon introduced in Generation VI. It is Swirlix's counterpart.

Spritzee is a small bird-like Pokémon. It is covered in fluffy pink feathers, and on its face it bears a white beak-like mask. Its eyes are large and red-orange in color, with thick black eyelashes. It has short fluffy wings and a curled tuft of pink feathers atop its head. Below its tiny body it has two small purple feet.

Spritzee likes to spray its fragrance around, which sometimes annoys other people.

Spritzee emits an unique fragrance from its scent pouch that causes anyone who smells it to fall under its spell. The type of fragrance that it may produce is based entirely on what it had eaten.

Spritzee can be evolved into an Aromatisse by trading it while holding a Sachet.

Spritzee is based on a bird, possibly a hummingbird, with aspects of cosmetics such as a perfume bottle (its shape) and powder puff (its round and fluffy appearance). Its bird-like appearance and association with perfume may also be based on plague doctors, who used bird-like masks and sweet scents such as perfume or flowers to deter the stench of people who had died to the plague.

Spritzee comes from spritz and Fée/Fee (French, German, and Dutch for "fairy"). 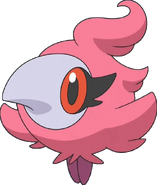 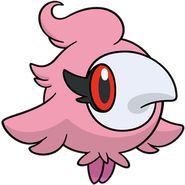 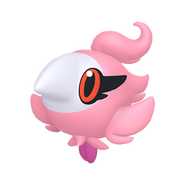 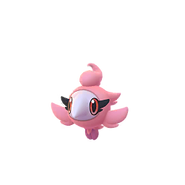