Spikey-eared Pichu is a female Pichu from the past that was bought to our time by Celebi's time traveling powers.

She first appeared in Arceus and the Jewel of Life. She also appeared in Get Fired up, Spikey-Eared Pichu!, the fourth ending song of the Diamond & Pearl series. It loves Grepa Berries. Its name in Japanese means Notch-eared Pichu.

It reappeared in the Pikachu short airing with the 15th Pokémon movie. 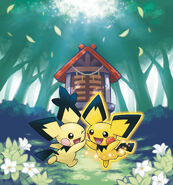 Spikey-Eared Pichu playing with Pikachu Colored Pichu in Ilex Forest
Add a photo to this gallery
Retrieved from "https://pokemon.fandom.com/wiki/Spikey-eared_Pichu?oldid=1291938"
Community content is available under CC-BY-SA unless otherwise noted.