Spectrier resembles a black horse with deep purple hair resembling wisps on its mane, hooves, and tail. It has eyes that seems to be always closed, each with eyelashes.

Being Nocturnal, it tends to be active during the night where its energy is heightened. Spectrier's kicks are said to separate a soul from its body, and it feeds on the ambient life-force it steals from others and will attack anyone that disturbs it.

Known to terrorize Crown Tundra, It can steal the life force of sleeping beings.

Spectrier does not evolve.

Spectrier possibly draws inspiration from the Four Horsemen of the Apocalypse with Spectrier representing the Black Horse of Famine given its ability to drain the life force of beings around it. It may also be based on a kelpie, a mythological spirit that is often depicted as a horse and originates from Scotland, which the Crown Tundra is based on. Kelpies in mythology are also stated to hunt those that attempt to ride them. This is shown with how Calyrex is able to tame and ride Spectrier. Alternatively, it could be based on the Púca, a mythological shapeshifting creature ridden by the High King Of Ireland that often took the form of a horse. The Púca was tamed by a bridle made of its tail hair, like the Reigns of Unity, and it tended to come in either black or white, just like Spectrier and Glastrier. It may also take inspiration from the black chess pieces in the game chess, specifically the Knight pieces, which depict a horse's head.

Spectrier may also be based on the concept of a spiritual form as opposed to Glastrier being based on a physical form. This is furthered with its high Special Attack stat (which is intended for special attacks, which are more supernatural in nature), its Ghost type (with ghosts being known for their spiritual form rather than being a physical body), and its ability to drain life force where it roams (life force is a spiritual aspect as opposed to a physical one).

Spectrier comes from specter and destrier (a medieval battle horse). 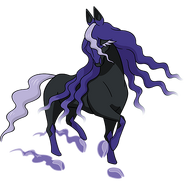 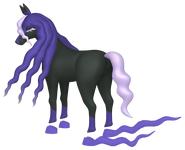