None
Southern Island is an area located to the south of the Hoenn region.

After receiving the Eon Ticket, the player character must head to the Lilycove City harbor, whereupon the S.S Tidal's captain will offer to take the Trainer to Southern Island. After arriving at the island, the player character must venture into the heart of the island, whereupon they will find an unusual stone. The stone object contains the inscription:

After this, the player character will encounter either Latias or Latios (in Emerald, whichever had not roam around the Hoenn region) and is at Level 50. It holds the item Soul Dew. After the successful capture of the Eon Pokémon, the player character is restricted from returning to Southern Island via the S.S Tidal.

During the conversation with Steven Stone on the east section of Route 118, Latias in Omega Ruby or Latios in Alpha Sapphire appears, asking for help. The player character and Steven soon rides on Latios/Latias to the Southern Island.

Latios in Omega Ruby or Latias in Alpha Sapphire appears in the deep part of the island, but Courtney/Matt appears alongside a Team Magma Grunt/Team Aqua Grunt, challenging the player character and Steven in a Multi Battle. Upon being defeated, the team retreats, and Latios/Latias joins the party (the player is asked to send one Pokémon into the PC if their party is full), holding its corresponding Mega Stone. With this, Steven gives the player a Mega Bracelet, and the two Trainers soar on Latias/Latios back to Route 118.

Like in Ruby, Sapphire and Emerald, the Southern Island is revisitable after the aforementioned visit, if the player has an Eon Ticket and talks to Norman in his gym. The counterpart Eon Pokémon (i.e. Latias in Omega Ruby and Latias in Alpha Sapphire) is battled in the deepest part of the island. Once it is defeated, the player obtains a Soul Dew. 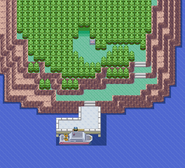 Entrance to the inside of Southern Island in Ruby, Sapphire & Emerald

An illustration of Brendan and May seeing Latias and Latios with their Pokémon on Southern Island
Community content is available under CC-BY-SA unless otherwise noted.
Advertisement