Sophocles is a Trial Captain that specializes in Electric-type Pokémon. He appears in Pokémon Sun and Moon and Pokémon Ultra Sun and Ultra Moon.

Sophocles is a short chubby boy, who has orange hair and green eyes. He wears a yellow scarf around his neck that resembles a Pikachu's tail and a white T-shirt, with an orange design of a Game Boy Color painted on it. He also wears brown pants with a yellow outline and some green shoes with lightning design and blue soles. On his right side of the hips, Sophocles has a keychain with a miniature Electrode attached and wears a belt containing a badge around his waist.

Sophocles is the fifth Trial Captain and he is on Ula'ula Island. One has to go through a Pokémon sound test first with him before facing Totem Vikavolt. After that, he smiles and gives the Electruim Z after completing his trial. He is also Molayne's cousin, and the boss of Festival Plaza. 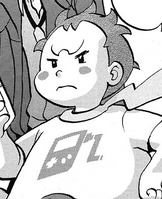 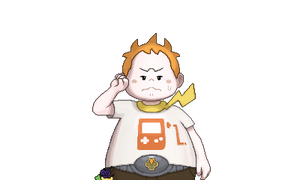 Sophocles' VS sprite in Sun & Moon

Retrieved from "https://pokemon.fandom.com/wiki/Sophocles?oldid=1346358"
Community content is available under CC-BY-SA unless otherwise noted.