In Pokémon Emerald Version, when Kyogre and Groudon were awakened by Team Aqua and Team Magma respectively, the two Pokémon appeared in the city's lake and battled each other until Rayquaza intervened and becalmed them.

Sootopolis City is also the location of Hoenn's Water-type based gym.

The city of Sootopolis has an overhead view of the sky shaped like a crater, a preservation of what was there before the city came to be. Sootopolis is built with staircases that lead to different parts of the city.

Sootopolis City is built in the crater of an extinct volcanoRSE or a meteor impactORAS, which soon filled with water during rainfall. Within the city is the Cave of Origin, guarded by one of the town's citizens. Sootopolis may be where the cataclysmic battle between Groudon and Kyogre fought thousands of years ago, implied by its subtle connection to Mt. Pyre. As quoted by the guarding citizen, "The spirits of Pokémon, becalmed at Mt. Pyre, are said to be revived here."

In "The Great Eight Fate!", Ash and his friends first arrived there so the former can have his final Gym battle against the Sootopolis City Gym Leader Juan. 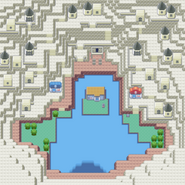 Entrance to the Cave of Origin (Gen III)

This lady will give the player a Big Wailmer Doll.

This Black Belt will give the player a TM31 (Brick Break).
Español
Community content is available under CC-BY-SA unless otherwise noted.
Advertisement