Pokémon Wiki
Register
Don't have an account?
Sign In
Advertisement
in: Female characters, Pokémon the Series: Ruby and Sapphire characters, Articles that need the latest image,
and 2 more

For the variant appearing in the games, see Solana.

Solana is a character appearing in the anime series.

Solana has crimson eyes, fair skin and spiky-edged teal hair with her bangs hanging over both sides of her face held back by a red headband and an upward-styled ponytail.

Her Rank 3 Ranger uniform consisted of a red, white and gold colored jacket with the Rank 3 symbol on her left sleeve and the Ranger symbol on her right with gold tassels on the bottom, the same coloration being on her gloves and high-tops along with black and gold socks reaching to her thighs. Underneath the jacket is a white and black jumpsuit with gold lines going down her hips and around her waist with a white belt containing a pocket for her Capture Styler.

When she returned, her uniform had changed to be based off Kate's: her jacket no longer had the symbols while the gold flaps were replaced by 2 white diamonds on the right side, her jumpsuit had been altered so that it had shorts going down to her knees and the white didn't stop at the top of her stomach: rather, it went down the middle while the black went on her hips. Over the shorts of the jumpsuit were bigger black shorts with gold ends while her white belt and pouch were replaced with a silver buckled red belt holding her new Capture Styler. Her high tops remained the same, though her long black socks were replaced with gold, ankle-length ones.

Solana and Plusle met Ash, Brock, May and Max in a forest off Cycling Road and attempted to prevent them from going any deeper into the forest. However, they explained that Ash's Pikachu sensed something and they were following him. After calling the Ranger Union, she led them to find Pikachu. As they got deeper into the forest, Solana sensed Celebi was nearby and captured three Linoone so they could use Slash on the growing vines. Upon finding Pikachu and Celebi, they gained Celebi's trust and helped it recover, only for it to be captured by Team Rocket in their mecha. As Solana freed Celebi, she commanded Plusle to use Thunder Wave to destroy the mech and watched Ash and Pikachu send Team Rocket blasting off with the latter's newly mastered Volt Tackle. After Celebi healed the forest and returned to its own time, Solana called the Ranger Union and told them her task was complete.[1]

She met Ash and co. again while looking for a meteorite while on a cliff and refused to let them come as she considered it too dangerous. After finding the cave where the electromagnetic disturbances were coming from, she discovered Max had followed her and, in turn, he had been followed by Ash, Brock and May, leaving her no choice but to let them come along. They soon found Deoxys at the end of the cave. She was unable to use her Capture Styler on it since Deoxys needed to be in its Normal Forme for it to work.[2] She, Ash, Brock, May and Team Rocket were shocked when Deoxys disappeared with Max and Meowth. She then travelled to the area of the sun's collision with a geomagnetic disturbance before returning to the cave with the others, where they discovered the meteorite was the source of the disturbances and exploded, with the group escaping the cave before it did. She attempted to capture Deoxys again and succeeded in doing so, only after Ash's Sceptile weakened it, healing it from the pain it experienced. After Deoxys left, Solana told the Ranger Union of the success of her task before departing again.[3]

Solana returned, now sporting her new uniform and without Plusle. Already in the Sinnoh region, she called Kellyn, who was with Ash, Brock and Dawn at the time. After greeting Ash and Brock and being introduced to Dawn, she informed them that she was with Officer Jenny, hot on the tail of Pokémon Hunter J's airship.[4] She and Jenny failed to arrest J's client and called Kellyn to tell them to stop J's client. They soon arrived and trapped the client's henchman with a Trapinch's Rock Tomb. After Riolu was saved, she and Kellyn reported it to the Ranger Union.[5] 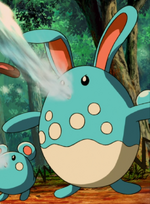 Solana and Jack's appearance in Spurt!