Snubbull is a pink, blue spotted, bipedal canine that resembles a bulldog. Its four ears are tipped with black and there are fangs coming out of its mouth.

Despite its rather intimidating appearance, Snubbull has a playful and affectionate personality, similar to the real-life bulldog, which makes it a popular pet among the women of the Pokémon world. Another of Snubbull's personality traits is its cowardice, which it tries to hide behind a gruff exterior.

If it feels threatened, Snubbull can bare its fangs and make its appearance intentionally intimidating to terrorize smaller or weaker Pokémon into running away. However, Snubbull has also been observed to be a little sad at driving away potential friends like this.

Snubbull evolves into Granbull at level 23.

Snubbull might be based on a bulldog puppy. Its name also a combination of snub and bulldog, and a pun of snuggle. Its original Japanese name however, only shorten as bull, yet still befitting its bulldog motifs. 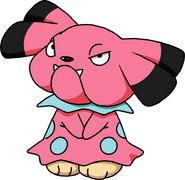 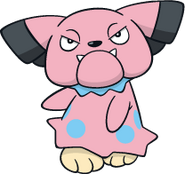 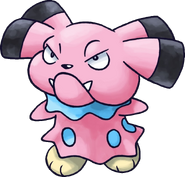 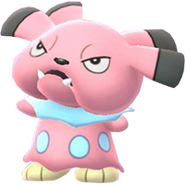 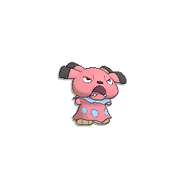