Snom is a small ice caterpillar-like Pokémon. They have a small face with two round mandibles and transparent blue spikes lining their back.

While they sleep, Snom disguises themself as an icicle by wrapping their body with their icy threads while anchored to tree branches. They consume snow that has accumulated on the ground.

Snom is able to enlarge its spiky armor after eating more snow.

Snom evolves into Frosmoth when they have leveled up with maximum friendship at night.

Snom is based on a grub or larvae of an insect, most specifically a jewel caterpillar. They may also be based on the Arctic Woolly Bear Moth larvae, who can withstand extremely cold temperatures. Its appetite for snow and lack of a mouth-like feature on its evolution may be based on different larvae or caterpillar species, some of which often eat large amounts of food before metamorphosing due to losing the ability to eat upon doing so. It may also reference an old method of removing clothing moth larvae from clothes, which is usually done through freezing the clothing or setting it in cold temperatures.

Snom is a combination of "snow", "worm", and "nom" (a slang word meant to describe eating, as Snom has a big appetite). 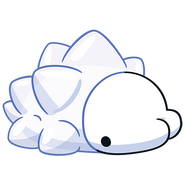