Sneasler is a humanoid weasel Pokémon. It has a dark grey humanoid body. Sneasler has three sharp toes on each foot connected to purple fur. The three brown claws are long with three red lines and a brown spot on each arm. It has a yellow diamond on chest and head. The shoulders have three dark grey spikes on shoulder. It has sharp red eyes. The face is colored dark purple. It has one right dark grey ear while the left ear is a long red feather that extends down to the back.

Sneasler are carnivorous loners that prefer solitary than forming packs or clans. They mostly dwell in mountainsides and snowy areas. They are also much mellower than their more vicious cousins Weavile, rarely attacking unless provoked. Their potent venom is used almost exclusively for hunting, as few Pokémon can reach the frozen highlands they call home, and even fewer dares challenge their sharp, envenomed claws. After finishing off their victims, they usually drag the corpses to secluded areas before feasting on the carcasses.

Sneasler are famed for their stamina. Even up where the air is thin, they can scale entire cliffs without having to catch their breaths. Their claws dig deep into the mountainside and keep them firmly planted against harsh winds. Even when cliffsides give way, Sneasler are able to nimbly reorient themselves to keep from slipping. These Pokémon have even been recorded sleeping while still embedded in mountainsides, finishing their climbs after their slumbers.

Sneasler's sharp curved claws enable them to climb up precipitous cliffs and mountains.

They have virulent poison that can easily kill their prey through injection from their claws. This venom paralyzes the nerves of its victims and renders them immobile, a death sentence on austere mountain peaks.

Sneasler evolves from Hisuian Sneasel upon holding the Razor Claw during the day.

Sneasler is mostly based on weasels, mainly the Ainu weasel, while also sharing traits of cats. The way Sneasler secretes venom may be based on slender lorises, which are known for secreting poison when threatened, or how normal weasels tend to be hosts of easily disseminated viruses.

Like Sneasel, it appears to be based on the Kamitachi yōkai, a weasel that uses its sickle-hands to cut people. Its added Poison type and humanoid figure appear to take inspiration from another yōkai: the Ōnyūdō. In the Ōnyūdō legend, animals (including weasels) are stated to transform into Ōnyūdō, making them take the appearance of monks who inflict illness onto those who lay eyes on them.

Their claws appear to be based on the claw-shaped grappling hooks that ninjas use for assassinations and stealth climbing. Its Poison typing can also be connected to assassination and ninjas, the latter of which has been previously referenced in the series.

Sneasler might come from the name of its pre-evolution and the suffix "-er", meaning "more". This could ultimately lead to the name meaning "more Sneasel", which alludes to the fact that it is visually similar to Hisuian Sneasel albeit slightly taller and with more features. 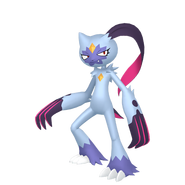