Slurpuff (ペロリーム Peroriimu) is a Fairy-type Pokémon introduced in Generation VI. It is Aromatisse's counterpart.

Slurpuff is a small, pudgy pink and white bipedal Pokémon that resembles a cream-puff. It has a chubby belly with a small red speck on its left side, and a red collar-like pattern around its neck. It has small red eyes, a tiny oval-shaped reddish nose, and a wide smiling mouth with a lolling tongue. When its mouth is open, two small sharp teeth can be seen. Slurpuff has drooping pinkish fluffy hair, and a red spherical appendage that resembles a cherry atop its head. Just below its chubby belly, two short pink three-toed feet protrude, and it has tiny white front paws with no visible digits.

Slurpuff is always sniffing around because it possesses an incredible sense of smell. It specializes in detecting sweet smells, and is incredibly fond of visiting bakeries and candy shops. Most pastry chefs form a mutual bond with Slurpuff so that they may help in improving the taste of their pastries via the sweetness and keen sense of this Pokémon's smell.

Slurpuff evolves from a Swirlix when the latter is traded while holding a Whipped Dream.

Slurpuff resembles a meringue cake or meringue nest dessert. It may also resemble a cupcake, who are also sometimes referred to as "fairy cakes", possibly being the inspiration for its fairy typing. It also resembles a Bichon Frise due to its puffy and dog-like appearance as well as its incredible smelling sense. Bichon Frises were also popular during the Renaissance in France, the country Kalos is based on.

Slurpuff comes from slurp and puff. 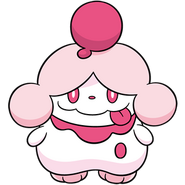 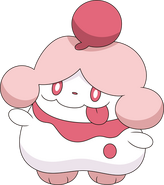 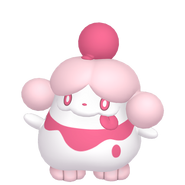