It has a Steel/Dragon Hisuian form introduced in Generation VIII.

Sliggoo is a gooey purple snail-like Pokémon. The top part of its body is a lighter shade of purple than its underside. Sliggoo has four long feeler-like horns atop its head and pale green spots lining its neck. When evolving from Goomy, Sliggoo's eyes devolved (resembling the green spots that Goomy had on its cheeks), so it is blind and must use its four feeler-like horns as a radar system to sense sounds and smells, as it lacks ears, a nose, and the ability to see. It has tiny stub-like arms on its deep purple underbelly, and a gooey snail-like shell on its back that seems to be part of its gelatinous body.

Its Hisuian form has a grey shell, which is suspected to be the result of its mucus reacting to the iron in Hisui's waters.

Sliggoo protect themselves from predators by coating their bodies with a slimy mucus that can melt through any material, even human skin; gloves are often used to prevent people from getting their skins melted while holding Sliggoo. They use their slime to liquify prey before consuming it. Because they have lost their eyesight after evolving, Sliggoo rely on their horns as a radar to navigate. They are not very intelligent, only concerning their own diets and evading from enemies in their tiny brains.

Hisuian Sliggoo are notably more melancholic, and tend to curl up in their shells. Like most mollusks, these shells serve to protect the Pokémon from harm, and the case of Hisuian Sliggo, their armor is nigh-impenetrable to even the strongest claws and beaks. The durability comes at a cost, however, and the extra weight makes it difficult for these Pokémon to maneuver. In consequence, Hisuian Sliggoo only move when absolutely necessary, spending long stretches of time rooted in one spot; when danger arrives, they simply tuck their heads into their shells and wait for it to pass.

Despite being blind, Sliggoo can use their horns as a high-performance radar system, allowing them to sense the sounds and smells in their environment.

Hisuian Sliggoo can hide themselves in their shells as self defense.

Sliggoo evolves from Goomy at level 40, and evolves into Goodra at level 50 (using moves or abilities to cause rain in a battle cannot make it evolve).

Sliggoo is most likely based on snails, slime monsters, or semislugs, most likely the latter due to them having a shell that they are unable to retract into, as Sliggoo's "shell" is more so a place where it stores it's organs. Originating in Kalos, it is likely based on Lou Carcolh, a creature in French folklore described as a slimy snail-like serpent that lives in caves, possibly being the origin of its Dragon type and behavior of liking moist environments (such as caves, as shown in the anime) and also furthering its snail inspiration. Its Dragon type may also come from the blue sea dragon, also known as Glaucus atlanticus, a species of sea slug.

Hisuian Sliggoo appears to be based on snails (possibly the Hokkaido grape snail, as Hisui is based on Hokkaido). It may also be particularly based on the scaly-foot snail, a gastropod whose shell contains traces of iron sulfides. 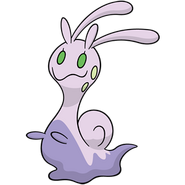 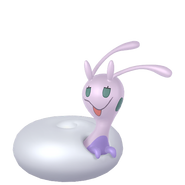 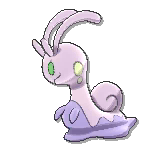 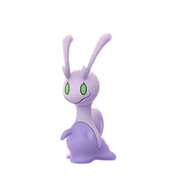