Skwovet is a small, slightly plump Pokémon that resembles a gray squirrel. True to the name of its species, it has round cheeks and a cheeky smile. It has an orange nose and orange “freckle” markings on the tops of its cheeks. Its fur is mostly tan, but the tip of its tail and ears are dark brown. It also has orange markings at the base of its ears, and the areas around its eyes and its somewhat engorged belly are pale brown. It has short arms and legs, thick, rounded thighs, and is somewhat chubby.

Skwovet are very gluttonous and love to eat. In fact, they love to eat so much that they get uneasy if their cheeks are ever empty of Berries. They have a habit of attacking people who try to shake Berry Trees, worried about losing their food. They'll also show up on farms in an effort to collect even more Berries.

Skwovet are commonplace in Galar, ranging from farms to trees in urban areas.

It evolves into Greedent starting at level 24.

Skwovet appear in "The Climb to Be the Very Best!", where it was eating some of Ash and Goh's scones. Goh took this opportunity to catch it, making Skwovet the second Pokémon Goh caught in the Galar region.

Skwovet is based on a slightly chubby Eastern gray squirrel, an invasive species introduced into the UK. Its Shiny coloration may be based on the Red Squirrel. 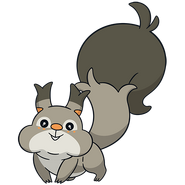 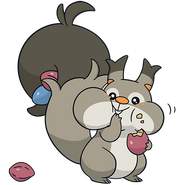 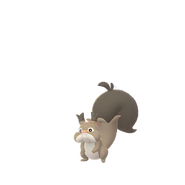