Skrelp is a brown aquatic Pokémon that resembles a marine animal similar to a seahorse called a leafy sea dragon. The tip of Skrelp's tail has three leaf-like fins. Skrelp has a pair of roundish, blue pectoral fins on the sides of its body, a purple belly and a blunt spike on its hunched back. Skrelp's face is the same color as its belly, with an upward-pointing snout and circular red eyes with small black pupils. A roundish blue growth with a brown stem sticks out on the back of Skrelp's head. It somewhat resembles Horsea in body shape.

Skrelp blend in with floating seaweed to camouflage themselves, hiding from predators to store up power for evolution, while also feeding on rotten seaweed as their main diet. They prey on unsuspecting marine Pokémon that mistake them for food, which they spray toxins at to finish off. Skrelp from Alola are often found near Dhelmise.

With their natural camouflage, Skrelp can conceal themselves as rotten kelp. They are also known for their poisonous liquid toxins that can finish off weak prey.

Skrelp is based on a common seadragon. Its Poison type may come from the fact seaweed releases toxic gases when it rots. 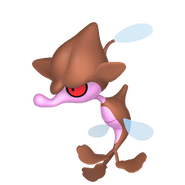 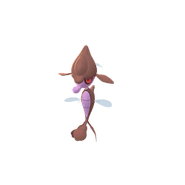