Skiddo appears to be a cross between a bush and a goat; it has small horns and a "leaf" cape, which covers the top of its somewhat chubby brown body.

Skiddo is a friendly Pokémon which is one of the Pokémon to live with the humans in early ages.

It doesn't mind helping humans to carry their luggage and loves humans to ride on it because of the long time it lived with them. It seems that Skiddo can use its horns to read humans' feelings.

Skiddo is based on a goat and possibly Faunus, gods of nature in Roman mythology that were half goat. It also shares traits with a bicycle as it is ridden like one and its horns resemble the handlebars of a bicycle.

Skiddo comes from skid (slide sideways or diagonally in a vehicle), kid (a young goat) and kiddo (slang for "kid", used as a name for young children). It may also be a play on the Ski-Doo brand of snowmobiles.

Its Japanese name, Mēkuru, is a portmanteau of メー (mē, the sound of a goat bleating) and bicycle, vehicle, and/or 車 (kuruma, "car" or "wheel"). 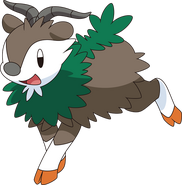 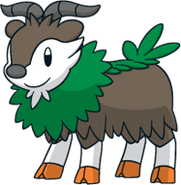 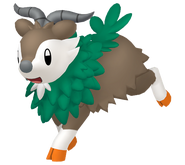