Sizzlipede is a small and red centipede Pokémon, it has yellow eyes with brown pupils, it also has red tiny legs on its body, and a mouth which is in the bottom of its fiery mustache like appendage on its face, it also has yellow circles on its body.

Sizzlipede are generalist predators that will hunt anything they can get their claws into. They absorb flammable gases produced by decaying plant matter on the ground and store it within their bodies. They can then ignite this gas to make heat, concentrating it in the yellow rings on their bellies. After Sizzlipede catch prey, they will coil themselves around their meals to simultaneously subdue and cook them. This allows them to go after tougher prey than one would expect for their size. Sizzlipede are voracious eaters that will consume every bit of a catch, but they can subsist off a single good meal for weeks at a time. They can be quite finicky regarding cooking temperatures and pride themselves on being able to cook meals to perfection. Because these invertebrates can generate heat, they can inhabit cold mountains that would be too chilly for other ectotherms. When Sizzlipede run out of gas, they will retreat beneath plant detritus until they finish recharging. These Pokémon compete with Venipede for resources in habitats where they both dwell.

Sizzlipede is a combination of sizzle and centipede or millipede. It may also come from lip, as the fire it sports on its face resembles a mustache, which is often referred to as a lip-brow. 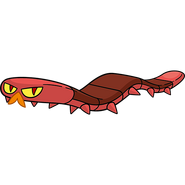 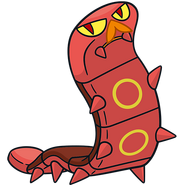