Sirfetch'd resembles its pre-evolution, but its feathers have all turned white. The heavy leek it dragged along as Farfetch'd has turned into a sword, with parts of the leek peeling to make a tang and its leaves fusing into the blade. The sword's other end is tipped with an onion. It carries a shield made of leaves.

it is the only Pokémon able to use Meteor Assault.

Sirfetch'd are calm, collected and noble knights who fight fair and square, so noble that they are chosen as a motif in ancient paintings, and the most famous one is about one battling against an Escavalier.

Sirfetch'd are also well known for treasuring their irreplaceable leeks, even keeping them as a weapon for years. They will only retire completely from battles if their leeks wither.

It is also stated that the leeks are also used as food although it is unknown how this works with it.

This Pokémon is the evolved form of Farfetch'd from the Galar region, evolving after successfully landing three Critical Hits in one battle without fleeing or fainting.

Ash's Galarian Farfetch'd evolve into a Sirfetch'd in Beyond Chivalry… Aiming to be a Leek Master! where they battled against Rinto and his Gallade during a World Coronation Series match and managed to defeat them.

Sirfetch'd and its pre-evolved form Galarian Farfetch’d follow similar routes of King Arthur Pendragon, who was originally a regular peasant prior to becoming a noble warrior. It may also be worth noting that Lancelot of the King Arthur myths' nickname/alias, The White Knight, may explain why it is white in color. Its leek, which now has a sharpened tip and a hilt, is similar to a sword, a weapon often used by knights, or a lance. Sirfetch'd fighting Escavalier is a reference on how medieval knights were depicted as warriors who fought against giant snails in medieval paintings.

It may also be inspired by the Japanese saying "葱が無いと" (must have a leek), which explains why it retires after its leek withers, as the saying no longer applies if it does not have a leek.

Sirfetch'd comes from "sir", a royal term for a knight, and Farfetch'd.

Its Japanese name, Negiganaito, comes from negi (leek), "giga-" (a prefix meaning "big" or "billion"), and naito (a rough Japanese translation of "knight"). Its name is also a bunched version of the phrase negi ga nai to (must have a leek). 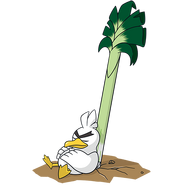 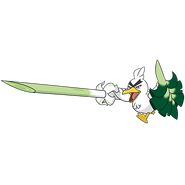 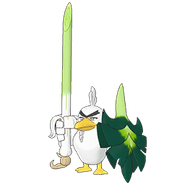 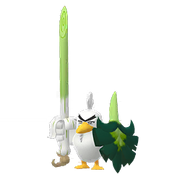