Simisage is a large monkey-like Pokémon. It has a large green bush of hair (resembling the hair of a stereotypical American classic rocker like Elvis) on the top of its head which has three yellow circles on it; the middle spot is bigger than the others. It has large monkey-like ears and big bushy white eyebrows. It has a long green tail and has fuzzy, white fur around its shoulders. Both of its hands are yellow and so are its three-toed feet. It appears to be wearing green pants, as its leafy green fur covers its legs and part of its belly. Simisage's torso is yellowish tan in color like its hands and feet.

Unlike its calmer and mild-mannered pre-evolution, Pansage, Simisage is a wild and savage Pokémon. It is ill-tempered and fights by wildly swinging its thorny tail.

Simisage is the evolved form of Pansage by use of a Leaf Stone.

Simisage is based on a monkey and a tree. 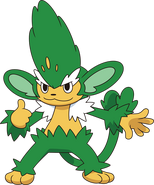 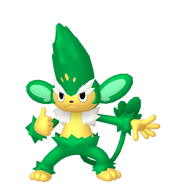 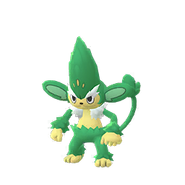