Silicobra (スナヘビ Sunahebi) is a ground-type introduced in Generation VIII.

Silicobra is a small, snake-like Pokémon that is colored tan, beige and dark brown and has green eyes with black pupils.

Silicobra's design is based on a cobra or other types of desert-dwelling snakes such as the rattlesnake or sidewinder. It could also be based on hognose snakes, which is known for flattening their neck when threatened. Despite it's name, Silicobra can't learn Bite.

Silicobra may be a combination of silicon and cobra. 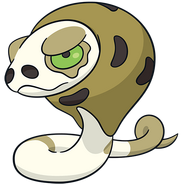 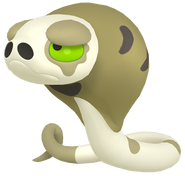