Shuckle (Japanese: ツボツボ Tsubotsubo) is a Bug/Rock-type Pokémon introduced in Generation II. It is known for having the highest base Defense and Special Defense stats of any Pokémon.

Shuckle appears to be a small yellow turtle inside a red shell with many holes in it, fitting all four of its legs out. Some beige-like color surrounds the holes in Shuckle's body.

Shuckle has the abilities Sturdy and Gluttony along with the hidden ability Contrary. Sturdy protects Shuckle from one-hit KOs whilst Gluttony increases the healing restoration of Shuckle when it eats a berry. Finally, Contrary makes stat changes have opposite effects.

In JE054: A Better Pill to Swallow, a Shuckle appeared. Butch's Shuckle and Conway's Shuckle appeared in DP065: Sleight of Sand! and DP185: Working on a Right Move! respectively. Shuckles also made more minor appearances in the anime.

Shuckle appears to be based on a tortoise or a turtle whilst its names appear to be derived from shuck, barnacle or the word turtle. 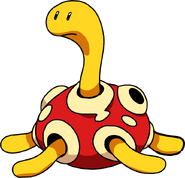 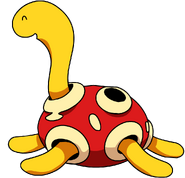 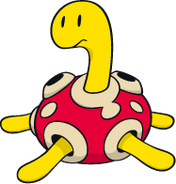