Shiinotic looks a lot like mushroom with a purple cap and pink legs.

Shiinotic seem to communicate with one another in ways humans cannot detect; scientists believe that their flickering spores or perhaps mycelium networks may play a role in this. Regardless of how they converse, these Pokémon seem to work together to ensure that the prey that they select remain unable to escape. They are a surprisingly cooperative species and are known to "share" sapped life force with one another through their mycelium.

Shiinotic can take energy from Pokémon and give energy to Pokémon, and the same goes for people and plants as well.

Shiinotic appears to be based on hallucinogenic mushrooms mixed with bio-luminescent mushrooms. Its Fairy-typing may come from "Fairy Rings", rings of mushrooms often found in open grassy areas, or the Coprinellus disseminatus (also known as a Fairy Cap Mushroom). Shiinotic also looks very similar to Toad from the Mario series, another Nintendo franchise. Shiinotic also shares some aspects with aliens with its thin build and fingers, its cap resembling a UFO, and its ability to learn moon-based moves such as Moonlight and Moonblast.

Shiinotic may be a combination of Shiitake or shine and hypnotic. It might also include narcotic, a group of powders, spores or drugs that effect the mind and body in different ways. 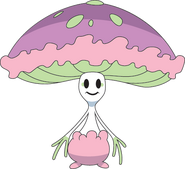 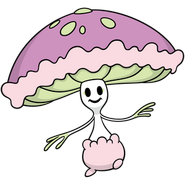 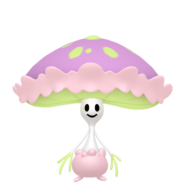