Sheridan in other languages

Sheridan is a character appearing in Pokémon: Advanced Challenge.

As Thatcher was traveling for a while, he encountered Sheridan. Sheridan offered him to be a part of the Pokémon Cheering Squad, which Thatcher accepted.

Team Rocket, who tried to capture Pikachu, have contacted Sheridan. Sheridan promised to assist them during the battle against the heroes, but only if Team Rocket paid him well. Sheridan came to the field, where he pointed out he and his squad was to cheer the underdogs up and improve their performance. In truth, during James' battle against Brock, Sheridan had Makuhita and Shroomish use Helping Hand on Cacnea, allowing it to defeat Brock's Forretress. In the next battle, where Jessie battled Ash, Sheridan continued to cheer and whisper his Pokémon to use Aromatherapy and Helping Hand. Jessie's Seviper managed to recover a lot of times and even exhausted Pikachu. Before Seviper could've defeated Pikachu, Max threw the drums away, pointing out the Pokémon inside were using Helping Hand and Aromatherapy, which made the battles unfair. Sheridan panicked, seeing the squad was mad at him and ran off. 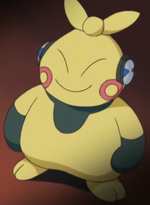