For the variant appearing in the games, see Shelly.

Shelly is a character appearing in Pokémon Adventures, who is an admin of Team Aqua.

Shelly is a woman, with a long hair.

Shelly has red eyes and curly orange hair, with two pigtails. She wears a blue bandanna with the Team Aqua emblem on it, a sleeveless blue vest, a pair of blue gloves, orange shoes and blue pants with orange circles. She also has a pair of grey earrings. Notably, Shelly doesn't wear a shirt, having her black bra exposed.

Before she became a Team Aqua admin, Shelly wore a short white-striped black shirt, which exposed her belly.

Shelly has dark tan skin and waist-length black hair in a fly-away style with two locks being blue, just like her eyes. Shelly wears a red lipstick, blue eyeshadow, has a black bandana and a pair of goggles on her head that look like the ones worn by professional swimmers but is connected by a metal link . She wears a blue shirt with long sleeves (exposing her thumbs, shoulders and her entire abdomen) with a Team Aqua logo on it. She also wears white-outlined blue pants, with light blue details on her knees and feet. She wears a yellow chain around her hips and has the area on the side of her thighs exposed.

Shelly is an intimidating woman, who tries to deceive other people into the works of Team Aqua. She finds sacrifices necessary in order to fulfill their mission. She also has a certain rivalry with Team Magma's Tabitha when conducting certain research.

Along with Tabitha, Shelly worked with Mr. Stone in Devon Corporation. However, both Shelly and Tabitha didn't like Mr. Stone nor his "one man system" and quit their jobs.[1]

Matt, Shelly and Amber were tasked to capture Mr. Stone; they have destroyed a fountain and let Mr. Stone's Castform get trapped inside. Since Sapphire rescued Castform, Matt, Shelly and Amber let their Water-type Pokémon attack out of the fountain and ambush Mr. Stone.[2] Their Pokémon assaulted Mr. Stone and grabbed an item from him, then ran off into the woods. Sapphire tracked the Pokémon down and met up with Matt, Shelly and Amber; Shelly's Lombre ambushed Sapphire from behind her. Shelly also threw her Water Stone and evolved her Lombre into Ludicolo. While Sapphire battled their Pokémon, the Aqua members got contacted by Archie. They told him they have the item, so Archie ordered them to silence everyone around them. Just as Sapphire wanted to retreat, Castform pointed at a sun ray, so Sapphire's Torchic used Ember and defeated Ludicolo. The Aqua members were surprised and distracted, allowing Sapphire to carry Mr. Stone, Gabby and Ty away.[3] The encounter with these people motivated Sapphire to grow stronger.[4]

Matt, Shelly and Amber returned to Team Aqua Headquarters. Archie congratulated them on the success and promoted them as Team Aqua admins. However, he pointed out they didn't silence anyone and claimed they needed no further instructions on the next task.[5] The incident of Mr. Stone and the men in blue clothes was reported to Captain Stern, who was shocked, since he expected the component for the submarine Team Aqua had stolen.[6] Upon hearing Captain Stern's report about the men in red, Gabby realized there were two enemy organizations.[7]

Shelly, along with Matt and Amber, took Flannery hostage.[8] Matt contacted Shelly and told her he finished off the "business". Shelly, however, turned to Professor Cozmo, who thanked her for assisting him in research, through finances. Shelly assured him nothing was wrong and asked Cozmo to just finish his research. Cozmo claimed their goal to protect the sea was honorable and went to do research on the meteorite, but Shelly ominously smiled.[9] Shelly showed Professor Cozmo the machine that would affect the volcano. Since she got reports Matt had been injured, Shelly decided to protect the professor, while Amber went to deal with Sapphire and Flannery.[10] Since they succeeded in extinguishing the volcano, Shelly, Amber, Professor Cozmo (who was in shock he got betrayed) and the Team Aqua grunts fled away.[11] They even had special mirrors placed, so any attack Sapphire launched was redirected towards her. Sapphire realized they escaped and was angry at their trickery.[12] Courtney also knew Team Aqua was after the Blue Orb to control Kyogre, while Team Magma was after the Red Orb to control Groudon.[13]

After the Gym Leaders' meeting in Fortree City, Winona, Flannery and Wattson knew they would face the Team Aqua admins.[14]

Shelly, along with Matt, watched how Wattson and Flannery were battling Kyogre. Just as they tried to interfere, Winona attacked them from behind with Skarmory and Altaria. Flannery decided to help Winona and sent Vulpix, though Shelly interfered and decided to battle her. Flannery recognized Shelly as one of the people that extinguished the volcano.[15] During the battle, Shelly gave Amber a Nincada, for he left his own at Seafloor Cavern. Just as Wattson was defeated and sank into the sea, Flannery tried to rescue him, but Shelly had her Ludicolo prevent her from doing that. She was also proud Amber defeated one of the Gym Leaders.[16] Shelly admitted she, Amber and Matt were the the admins of Team Aqua. Her Ludicolo used Nature Power, which hit Flannery's Vulpix. Shelly claimed the attack came from the sea they wanted to expand. And for that mission, Shelly claimed sacrifices were inevitable, just like they used Professor Cozmo.[17] With another Nature Power, Shelly's Ludicolo defeated Flannery's Vulpix. Just as Shelly decided to teach Flannery with a final blow, Winona came to protect Flannery. Ludicolo was unable to repeat its attack, due to Vulpix's Grudge. Shelly was quite angry and retreated away.[18] The battles between Gym Leaders and Team Aqua and Magma admins were reported to Norman.[19]

Maxie and Archie picked up the Red and Blue Orbs and intended on betraying their subordinates and crush them, including any authority to rule the world.[20]

When Amber visited the remains of Team Aqua's headquarters, he thought of Shelly and Matt, his comrades, with whom he worked together. He soon saw them having returned to the base, but stopped, knowing this was an illusion. Thus, he had his Gorebyss extinguish Blaise's Slugma's illusions.[21]

A "new" Tabitha, Shelly, Matt and Courtney arrived to assist Zinnia. They admitted their names were *shared* by other people of Team Aqua and Magma, as those were just codenames they inherited from the old admins of Team Aqua and Magma. Tabitha tried to propose Zinnia to wear his protective suit on, but Shelly hit him with his elbow, since she wanted Zinnia to wear her suit. Zinnia ignored both of them and flew on Salamence to sabotage the rocket launch. Later on, the Team Magma and Aqua admins watched as Zinnia battled Sapphire on the rocket.[1]

Shelly, along with Team Aqua and Magma admins, were found at the Battle Frontier, where they were intimidated by the Frontier Brains.[22]

Shelly spoke with Tabitha, Mr. Stone and the Trick Master, for they all thought of various ways to strike the meteorite and protect the lorekeeper.[23] Eventually, they saw how everyone launched their attacks and shattered the meteorite. However, Tabitha and Shelly were in shock the life support system of the suits Ruby and Sapphire wore had been cut off. In the end, Tabitha and Shelly watched how Ruby and Sapphire descended down with Rayquaza back to Sootopolis City.[24] 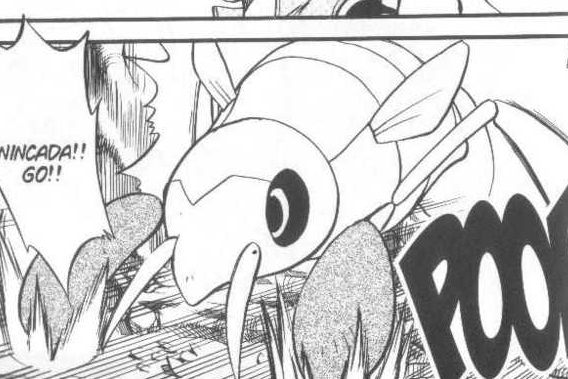 In Omega Ruby and Alpha Sapphire arc, it turns out that the admins of the reformed Team Aqua and Team Magma are different from the ones in the Ruby and Sapphire arc as the names are codenames used by each team.

Retrieved from "https://pokemon.fandom.com/wiki/Shelly_(Adventures)?oldid=1270742"
Community content is available under CC-BY-SA unless otherwise noted.