This Ludicolo is a water/grass-type Pokémon owned by Shelly from the Ruby & Sapphire arc.

Since Shelly, Matt and Amber couldn't capture Mr. Stone in secret, they had their Pokémon attack him.[1] The Pokémon attacked Mr. Stone and took one of the components he held in his pockets. Gabby and Ty also noticed a mark of Team Aqua on their bodies. Eventually, Sapphire faced the Team Aqua members, with Shelly having her Lombre making a sneak attack on her. During the fight, Shelly threw a Water Stone at Lombre, who evolved into a Ludicolo.[2]

The attack was also reported to Captain Stern and Dock, who expected Mr. Stone to deliver the part for their submarine.[3] While they watched Archie teaming up with Maxie, Gabby and Ty realized Archie was the director of TV Hoenn was Team Aqua's leader and sent his subordinates to attack Mr. Stone and extinguish the volcano.[4]

Ludicolo continued attacking Sapphire's Torchic, Chic. However, Castform signalized to Sapphire the sunray casted onto Ludicolo. Her Chic came close to Ludicolo and fired Ember, which dealt serious damage on Ludicolo. The Team Aqua members were surprised and got distracted, allowing Sapphire to run away.[2] The encounter was remembered by Sapphire, who decided to grow stronger to combat these foes.[5]

Shelly sent Ludicolo to attack Flannery and capture her.[6]

After the Gym Leaders' meeting in Fortree City was over, Flannery, Winona and Wattson were aware they would soon fight Team Aqua admins and their Pokémon.[7]

Shelly sent Ludicolo to battle Flannery. Wattson, whom Amber defeated, was drowning in the ocean; Flannery tried to rescue him, but Ludicolo grabbed her and stopped her from saving Wattson.[8] Ludicolo started using Nature Power and hit Flannery and Vulpix with Hydro Pump. Flannery believed someone else was attacking her, but Shelly explained Nature Power harnesses the power of nature and forces it onto the opponent. Ludicolo repeated its attack and hit Flannery and Vulpix with Razor Leaf, then made them both cough. After explaining Team Aqua would require sacrifices for the better future, Shelly's Ludicolo launched another Nature Power.[9] The attack defeated Flannery's Vulpix. However, due to Vulpix using Grudge, Ludicolo was unable to repeat its attack. Shelly was furious and called Ludicolo back, then fled from the battlefield.[10] 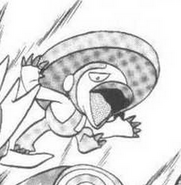 As Lombre
Add a photo to this gallery

Retrieved from "https://pokemon.fandom.com/wiki/Shelly%27s_Ludicolo?oldid=1167627"
Community content is available under CC-BY-SA unless otherwise noted.