Shelly in other languages

Shelly is one of the three Admins in Team Aqua.

Shelly has red eyes and curly orange hair. She wears a blue bandanna with the Team Aqua emblem on it, a sleeveless blue vest, a pair of blue gloves, orange shoes and blue pants with orange circles. She also has a pair of gray earrings. Notably, Shelly doesn't wear a shirt, having her black bra exposed.

Her outfit in Emerald is the same as it is in Ruby and Sapphire.

Shelly has dark tan skin and waist-length black hair in a fly-away style with two locks being blue, just like her eyes. Shelly wears a red lipstick, blue eyeshadow, has a black bandana and a pair of goggles on her head that look like the ones worn by professional swimmers but is connected by a metal link . She wears a blue shirt with long sleeves (exposing her thumbs, shoulders and her entire abdomen) with a Team Aqua logo on it. She also wears white-outlined blue pants, with light blue details on her knees and feet. She wears a yellow chain around her hips and has the area on the side of her thighs exposed.

Shelly is a bit passive aggressive and is very easily annoyed. She isn't the best to deal with problems head on, but she can take them from behind like a champion.

In Sapphire, she appears first at the Weather Research Institute and then at the Seafloor Cavern. In the first battle against her, she has a Carvanha and a Mightyena. At the Seafloor Cavern the only change is that her Carvanha has evolved into Sharpedo. Shelly doesn't appear in Pokémon Ruby. 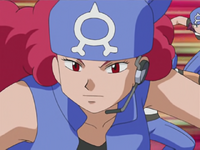 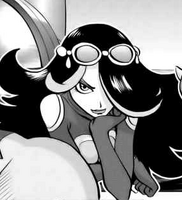