Shaymin, unlike most Pokémon, is able to change back and forth between two forms, a land and a sky form, both of which have their own unique appearance and abilities. Shaymin's Land form looks similar to a hedgehog. Its body is pure white and on its back it has green grass, along with a pink Gracidea flower growing on either side of its head. It is also relatively small, being only 00'08" in height and 04.6 pounds according to the Pokédex, which means Shaymin's Land Forme is one of the smallest Pokémon.

Shaymin's Sky Form is almost completely different from its Land Form. In this form, Shaymin has a reindeer-like appearance,(mixed with a bit of dog and cat like features) and it is also larger. Its legs are much longer and are now a green color. The green grass-like fur is now confined to its head and fashioned similar to a Mohawk. Its ears are now very long, appearing almost like wings. On the back of its neck are two red petals, resembling a scarf. Flowers grow on Shaymin's back when it is relaxed, but rapidly go back in when its relaxation is disturbed. This means when it is surprised or frightened, the flowers rapidly go back in.

In order to go unnoticed by intruders or attackers, it utilizes its own form of camouflage; rolling up into a ball resembling a flower in a patch of grass. By doing so, it blends in with the surrounding flowers, going undetected even if the attacker is beside it. It also has the power to decompose the toxins in the air and turn the land into flower fields in an instant. It is believed that Shaymin turned the desolate area of Floaroma Town into a fertile field. Its unique move, Seed Flare, is a powerful Grass-type move that has a chance of lowering the opponent's Special Defense. Depending on the toxicity of the substance that Shaymin inhales using Seed Flare, the end result of using it can range from being relatively harmless to destructive and potentially dangerous— as mentioned by Nurse Joy in Pokémon: Giratina and the Sky Warrior, a Shaymin made the mistake of inhaling toxic air using Seed Flare, and because of the severely high toxicity of the toxic air it inhaled, the blast from the Seed Flare destroyed at least half of an entire forest. And depending how much of the pollutant remains in it's body and how fast it expels the remaining toxins, inhaling pollutants can make the Shaymin feel kinda sick and not feeling so-great afterwards.

Vanilla Yamazaki lent both their voices in the movie. Its Land Forme end its sentences with "deshu" (to emphasize its cuteness) and that of its Sky Forme is "desu".

Shaymin debuted in the games Pokémon Diamond and Pearl. However, it has only been obtainable through events such as the 11th movie event in Japan and the Toys "R" Us giveaway. It is also soon to be given away in the UK and Denmark through some GAME stores to celebrate the release of Pokémon Platinum.

In Pokémon Diamond and Pearl Shaymin is obtainable at the Flower Paradise location. The only way to access this area is to receive the item Oak's Letter from an event in Japan. Receiving this item and speaking with Oak at the specified location will cause a long path to appear, which leads to the Flower Paradise. Some have bypassed the issue of obtaining the letter by using a cheat device to either cause the event to happen or use a "walk through anything" cheat to walk across the water into the Flower Paradise.

Also, it helps to know that at one point, there was a Pokémon Ranger: Shadows of Almia Wi-Fi Special Mission that has since been taken down. In Pokémon Platinum, Shaymin are able to change into an alternate form known as its "Sky Forme". In order to change into its Sky Forme, the Gracidea Flower item must be used on Shaymin, but this can only be used during the day. Also, Shaymin will revert to Land Forme when it is put back into the PC or when it is frozen. In order to obtain the flower, a player must take their Shaymin with them on their first visit to Floaroma Town. In Pokémon HeartGold and SoulSilver, the Gracidea can be obtained when the player walks in the Goldenrod Flower Shop with a fateful encounter Shaymin in front of the party.

It was featured in the 11th Pokémon Movie, Giratina and the Sky Warrior, with Shaymin given a starring role.

Another Shaymin appeared in a Sinnoh League Victors episode "Keeping in Top Forme" where a girl named Marley helps a it get to the Gracidea flower garden so it can be in sky form and migrate with its friends. Before that, it made a small cameo in the ending for Arceus and the Jewel of Life, along with Darkrai.

A different Shaymin, first appeared in Memories in the Mist! of Pokémon the Series: Sun & Moon - Ultra Legends, where it was found by Mallow and her Tsareena, after the two latter’s brief reunion with the ghost of Mallow's mother before the fog fades away, just as her spirit began to fade as well to return to the afterlife. Mallow is later watching over it until it awaken its Sky Forme. Upon awaken its Sky Forme at the finale, thanks to Ulu for bringing Gracideas, this form has eyelashes akin to females, unlike other Shaymin.

The name Shaymin comes from the Japanese word, Sha meaning gratitude, thus its nickname "the Gratitude Pokémon" or "Spirit of Gratitude" the Stamen which is a part of flowers, and miniature meaning small or miniature. It might also come from Shamayim (heavenly sky), referencing its Sky Forme. 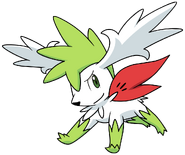 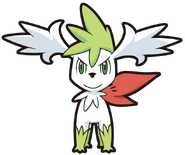 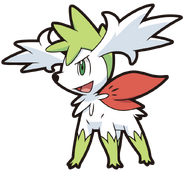 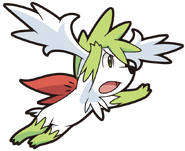 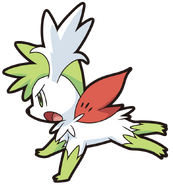 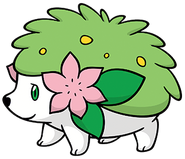 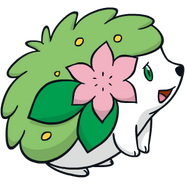 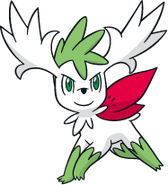 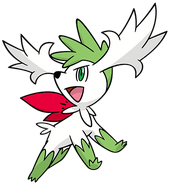 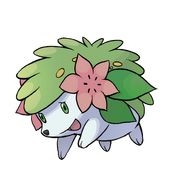 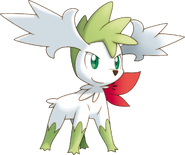 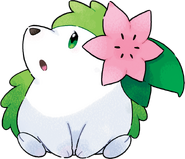 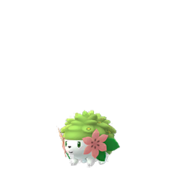 In a event Calendar
Add a photo to this gallery