"Eyes brimming with dark flame, this man rejected everything other than himself in order to bring about one singular justice...' That's part of a novel I'm writing. I was inspired by the challenger who was just here, and somehow I got a little sad... Excuse me. You're a challenger, right? I'm the Elite Four's Ghost-type Pokémon user, Shauntal, and I shall be your opponent."
— One of Shauntal's speeches in Pokémon Black and White, this one involving N.

Shauntal is the first member of Unova's Elite Four who specializes in using Ghost-type Pokémon.

Shauntal has purple hair and glasses; her outfit is a purple dress with dark purple tights and pink Mary Jane shoes. She wears an additional black collar to her outfit and black gloves. Her books and pens are pink.

Rather bookish, Shauntal loves to write stories. She is fascinated with her Ghost-type Pokémon, often using them as the muse of inspiration to write, as well as the trainers that she battles. Shauntal sometimes carries around with her a pen and a blank book so that way she could write the next chapter of her story. She gets her stories based on her Pokémon team.

In Black 2 and White 2, her role is exactly the same as the previous games. 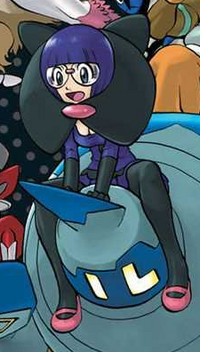