Sewaddle is a small larval Pokémon that resembles a caterpillar or silk worm. Its body is covered in a green leafy coat, and it has a hood-like leaf encircling the back of its head. It has a round yellow head with two lumps on top. It has small black eyes and an orange mouth with two sharp teeth visibly protruding from its upper jaw. It has a white neck and six tiny orange stubby feet.

Sewaddle makes itself leafy clothes using chewed-up leaves and a thread-like substance it produces from its mouth, though Leavanny tends to make its first set after hatching. By folding it over its face, its leafy hood is used to help hide it from enemies, whether awake or asleep. It has been shown to eat berries, but when food is scarce it will eat its leafy clothing as an alternative.

Sewaddle evolves into Swadloon at level 20, and then to a Leavanny after a high enough friendship.

Sewaddle appears to have similarities of a caterpillar and a silk worm. It may specifically be based on a leaf rolling caterpillar, which rolls up leaves that it and other bugs hide in. It may also be based on the silver-spotted skipper, which uses leaves and silk to shelter itself. The leaf on the top of its head also resembles a baby bonnet.

Sewaddle comes from sew (referring to how it is based on a silk worm) and swaddle. 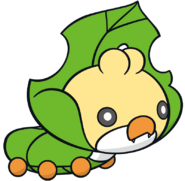 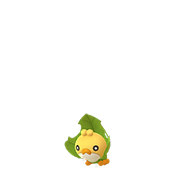