Selene is a Pokémon Trainer and the female protagonist in Pokémon Sun and Moon. She is one of the two main protagonists alongside Elio. She also appears in Ultra Sun and Ultra Moon, the remakes of the previously mentioned games. At the end of the games, she becomes the first ever Champion of the Alola region alongside Elio.

Selene has black hair with side-swept bangs aligned to the left. She has pale skin and slate-grey eyes. Like in X and Y, her appearance is customizable.

Selene wears a red flower-like toque on top of her head. Her clothes consist of a loose light cream colored t-shirt with light pink and gold flower patterns spread across it. The shirt is tied at the bottom and she wears a white tank top underneath it. She also wears small teal shorts and red and black Litten-themed shoes with large yellow laces. Finally, she sports a grey Z-Ring on her right arm.

Selene wears a sleeveless orange shirt with a white trim. The straps of the shirt are also white, and red flowers dot the surface along with an opening resembling flower petals at the bottom. She wears puffy white shorts and black, green, and, white sandals. On her head, she wears a yellow pork-pie hat with a salmon pink flower in it. Her hair is also longer and braided.

Like every other playable protagonist in the core games, Selene is silent and has no pre-existing personality. Except for some premade dialogue choices, she is completely mute. Unlike the previous few games (Omega Ruby, Alpha Sapphire, X and Y, etc.), she does not appear if the player does not choose to play as her. Therefore, it is nearly impossible to figure out her personality.

If Selene is selected to be played, she is born in Kanto and travels to Alola with her mother. She talks to Professor Kukui over video chat at the beginning of the game. Not much else is known about her, other than the fact that she is very young. She is at least 11, though, as she is able to partake in the Island challenges.

Over the course of the game, Selene makes some new friends. She befriends Hau and Lillie, and meets her Cosmog, Nebby. She travels around the region, simultaneously enjoying her vacation and beating back Team Skull at the same time.

In the Pokémon Adventures manga, she is named Moon and is a Pokédex Holder. She came from the Sinnoh region to find a cure for a poisoned Piplup. After she acquired a Rotom, she also decided to assist Professor Kukui. However, soon after coming to Alola, she got in an argument with Sun, who decided to join her after ruining her clothes.

Artwork of the Poké Finder.

Art of Sun, Moon, and many more characters in Ultra Sun and Ultra Moon. 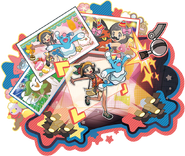 Art of the Alola Photo Club.
Add a photo to this gallery
Retrieved from "https://pokemon.fandom.com/wiki/Selene?oldid=1265306"
Community content is available under CC-BY-SA unless otherwise noted.