Seismitoad is a bulky, blue, bipedal toad-like Pokémon. Its underside and the speaker-like bumps found on various parts of its body are cyan with black edges around the belly. Its hands and feet have three bulbous digits. Additionally, Seismitoad have red eyes, cyan adornments on its legs, and a long tongue.

In terms of ecological niches, however, they fulfill a very similar role to the Poliwag family (though they tend to inhabit muddier, oxygen-poor environments). They are notable for the numerous vibrating organs they have within their bumps, which they use to both communicate and defend themselves. Seismitoad are also infamous for the hallucinogenic toxin they secrete from their skin; while ingestion of Seismitoad toxin was not unheard of prior to the 1960s, it was not until a sensationalist article in a Kalos magazine was published that it became more commonplace (and illegal).Seismitoad are aloof Pokémon. They do not react much to the presence of humans. They almost always fight when they sense danger

The various lumps on its body have varying capabilities. The ones on its head can shoot a paralyzing liquid, while the ones on its hands can be vibrated to increase its punching power. It can also vibrate the lumps as a source of torment for its opponents. The vibrations can also start an Earthquake, and the elderly often use the vibrations to massage themselves.

Seismitoad is the evolved form of Palpitoad at level 36. It is the final form of Tympole.

Seismitoad is based on a toad and a loudspeaker. Its bumps appear to be based on headphones and the poison glands found on toads. It may be based on The Surinam Toad specifically (both can produce underwater vibrations), as well as the Goliath Frog (which is a huge frog, considering its size).

Seismitoad comes from seismic and toad. 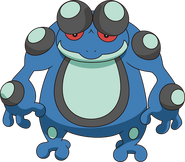 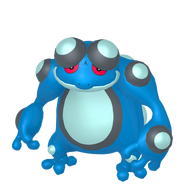 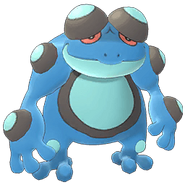 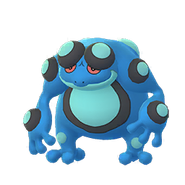